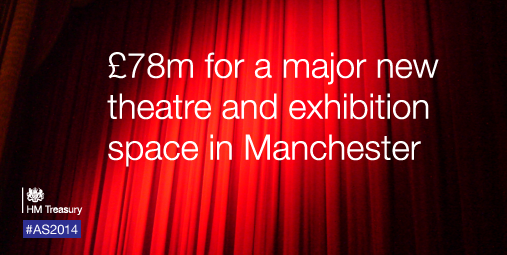 Leading Manchester figures have welcomed the announcement today of £78m to support the expanding cultural offer in the city.

The Factory Manchester will be a unique large scale, ultra-flexible arts space capable of transforming from a 2,200 seat theatre to an immersive artistic environment with a standing capacity of up to 5,000 and will be the permanent home to the Manchester International Festival (MIF).

It will produce other work in the innovative spirit of MIF from across the arts and popular culture – attracting the best national and international artists and companies. The Factory Manchester will play an integral part in helping Manchester and the North of England provide a genuine cultural counterbalance to London, supporting the city and region’s growth.

The Factory Manchester will be a major catalyst to the cultural economy in the North West of England and beyond, attracting clusters of related activities and extra visitors to the city. It is calculated that within a decade it will help create, directly or indirectly, the equivalent of 2,300 full time jobs and be adding £134m a year to our economy.

Many artists and art forms are currently constrained by the limitations of the centuries-old buildings where performances take place. The Factory Manchester will be an artist-led space, a new kind of large-scale venue fit for the 21st Century and capable of holding a MIF style performance every week, year on year. It will have the flexibility and technical sophistication to enable a huge range of work across different art forms and popular culture to be presented to reach the widest possible audiences. Crucially, it will also enable and indeed encourage work with emerging technologies and new media – making it fit for the art of the future as well as the most innovative current work of today. The Factory Manchester will complement existing cultural gems such as the Whitworth Art Gallery, the soon to open HOME and the already successful Lowry and Bridgewater Hall – which together with the BBC make up the dynamic creative ecology of Greater Manchester .

In naming this new arts space as ‘The Factory Manchester’, the city is paying tribute to the cultural legacy of Factory (Records) which still resonates strongly as a creative influence worldwide. Factories are of historic importance to Manchester and this will be a venue for creative production, a place where art will be made, a factory for art that respects the city’s past whilst propelling it forward.

The Factory Manchester will sit at the heart of a new creative village – St John’s, in the city centre on the former Granada Studios site, establishing Manchester as the country’s most important arts and cultural employment centre outside London.

Today’s announcement confirms the Government’s endorsement of the strategy. The next phase involves more detailed work and the Council looks forward to working with local and national partners to shape the funding plan so the ambition to open by 2019 can be realised.

Sir Richard Leese, Leader of Manchester City Council, said: “Manchester has a thriving creative industries sector and culture plays a central role in our growth strategy. The arts are not just a major employer in their own right but help us to develop, attract and keep talented people and is a fundamental element of a city where people choose to live and work. The Factory Manchester will also feed the increasing demand for arts as the city continues to grow and provide a Northern base for those wanting to work in the creative industries to grow their skills.”