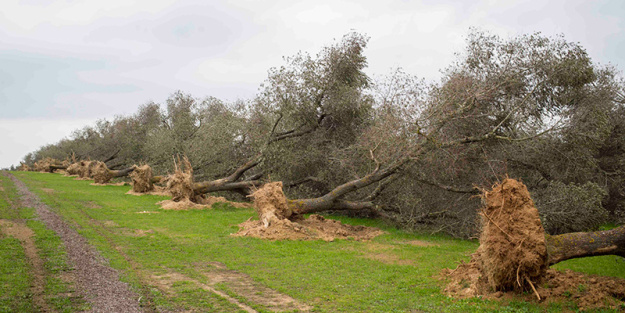 The University of Salford is part of a national strategic plan to thwart the invasion of a deadly plant disease.

Xylella Fastidiosa described by the EU commission as one of the world’s “most dangerous plant bacteria”, already infects 500 species worldwide including crops, ornamental plants and trees. In Italy more than one million olive trees are dying due to the Xylella pathogen.

Citrus, grapevine and stone fruit (almond, peach, plum) are also affected, while in North America the pathogen is affecting farming, raising fears for the viability of some foods.

“It can spread undetected for months or years before you can even see it,” explained Stephen Parnell, an epidemiologist from the University of Salford’s Ecosystems & Environment Research Centre and a member of a new consortium to fight the disease, announced today  by Lord Henley for BEIS.

The BRIGIT Consortium funded to the tune of nearly £5m is tasked with preparing for the possible introduction and spread of Xylella Fastidiosa into the UK.

Scientists like Dr Parnell will work to improve methods of diagnosis and detection of the pathogen, assuming it will inevitably cross over our borders.

Funding for the work comes via the Biotechnology and Biological Sciences Research Council (BBSRC) and the Natural Environment Research Council (NERC), the Department for Environment, Food and Rural Affairs (Defra) and the Scottish Government which are providing additional funding of £1.1m.

So far, Xylella– which is spread by insects has not been reported in the UK, but with thousands of plants imported into the country each day, its arrival could be just a matter of time.

Dr Parnell explained that if Xylella infected plants or insects that carry the pathogen do enter the UK, the disease could spread through native insects, to trees, including the UK’s native oak and commercial crops.

Professor Saskia Hogenhout, a project leader at the John Innes Centre and one of the principle investigators of BRIGIT, says: “Despite its impact, we know very little about how the bacteria might spread in Northern Europe. We believe this consortium is much-needed, bringing a joined-up approach to tackle a potentially damaging plant disease.”

She confirmed that research will focus on how Xylella may spread in the UK either via insects or via transport of plants across the UK by humans, and a key focus will be introducing and improving best practice in the horticultural trade, to mitigate the impact of any introduction.