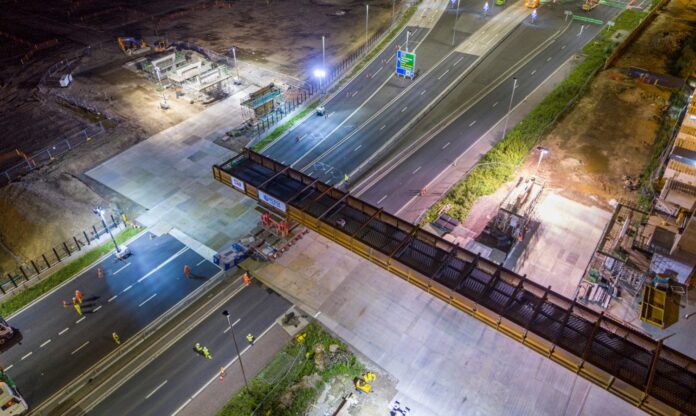 A giant foot and cycle bridge linking Wythenshawe to the Manchester Airport campus was installed this weekend.

The 380-tonne structure spans the M56 spur airport approach road and its installation marks a major milestone for the Airport City Manchester project, which will deliver more than 15,000 jobs in the years to come.

The bridge – part-funded by Manchester City Council – will serve as a valuable pedestrian and cycle link between the Woodhouse Park area of Wythenshawe and the airport site, benefitting the thousands of local people who work there.

It will also provide direct access to the employment opportunities being created by Airport City Manchester, as well as enabling people to walk or cycle to the airport’s train, tram and bus station.

The bridge was fabricated by Cleveland Bridges who, working closely with main contractor BCEGi, were also responsible for undertaking the complex 12-hour installation.

There are around 25,000 people working on the Manchester Airport site. It also has its Airport Academy training centre within its Ground Transport Interchange, which provides employment and training for local unemployed people. Earlier in the year, a state-of-the-art AeroZone interactive classroom opened, which will be used by all schools in Woodhouse Park and the wider Wythenshawe area.

“I am delighted to see this finally open at Airport City Manchester. A dedicated pedestrian and cycle bridge gives safe and convenient access to many types of public transport arriving to and departing from the airport’s hub and crossing our region. I am a determined to improve active travel for all and am delighted Airport City Manchester is providing the opportunity of new jobs and new connectivity for both businesses and residents alike.”

“Manchester Airport is proud of the role it plays in providing employment for so many local people, either directly or with the dozens of different companies that operate on our site.

“This new bridge will give those living in surrounding neighbourhoods a safe and sustainable way to travel to the airport campus, whether they work here, are using our Ground Transport Interchange or are accessing other facilities like our new AeroZone education centre or Airport Academy training hub.

“As excitement builds around the Airport City vision becoming a reality in the months ahead, this link will help give local people the best possible access to the opportunities being created.”

Airport City Manchester has the capacity to deliver a diverse range of more than 15,000 jobs across a number of sectors. Already, the first phase of The Hut Group’s £1bn THG business campus is underway and, upon completion, this 1m sq ft global headquarters site will support up to 10,000 jobs.

The wider site also has the capacity to accommodate further development, including two 92,000 sq ft Grade A office buildings and a multi-story staff car park, planning consent for which has been granted.

The brand new bridge at Airport City Manchester is set to open to the public in November this year and when fully complete will blend into the neighbouring buildings with extensive landscaping and public realm, as well as providing feature ramps and passenger lifts to ensure it is accessible to all.

Designed by Manchester architects 5Plus and structurally designed by RoC Consulting, the 52.5m long and 6m wide bridge is a striking addition to the landscape at Airport City Manchester. Featuring more than 21,000 perforations across its length, it has been constructed from Cor-Ten steel which develops a rust-like aesthetic after several years’ exposure to weather and eliminates the need for painting.

“The new bridge is a key component of the Airport City Manchester masterplan and capitalises on the exceptional connectivity to multiple modes of public transport at the Manchester Airport Ground Transport Interchange. In turn this will underpin increased usage of public transport to more sustainably facilitate occupier needs and enhance convenience for employees, visitors and neighbouring residents alike.

“It’s a striking addition to the local landscape, with the architecture reflecting our ambition to create a real sense of place and signal a high quality of environment. The bridge connects the emerging hotel district south of the M56 spur road to the larger swathe of development-ready land to the north, which is earmarked primarily for office and ancillary uses. It also enables car parking to be decanted away from the heart of the scheme helping to enrich the amenity value of public open spaces.

“Together with significant additional investment in enabling infrastructure and the live construction activity underway to deliver our first two hotels and the THG HQ campus, we continue our pursuit of the many lasting positive benefits of the scheme.”