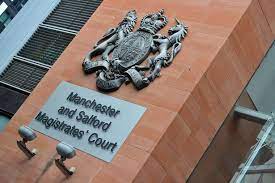 Daniel Smith ,41, of Park Road, Oldham has been remanded into custody ahead of an appearance at Manchester and Salford Magistrates’ Court today

Police were called  to a report of concern for the welfare of a woman at an address on Ashton Road, Oldham on Thursday, the woman was sadly pronounced dead at the scene.

The incident has been referred to the IOPC as per standard procedure following previous police contact.

A 35-year-old man arrested on suspicion of murder has been released under investigation.