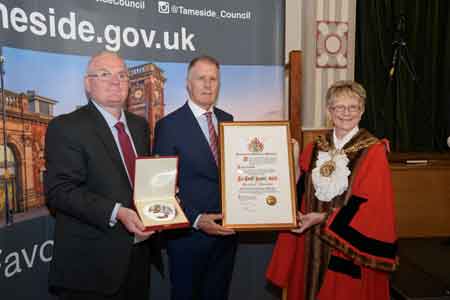 He returned to receive the freedom of Tameside and to open the new £600,000 antenatal unit at Tameside Hospital, Ashton, where he was born in 1941 in what was then known as the Lake Hospital.

Sir Geoff also found time to watch some grassroots football at Hyde United where his father played in the 1930s.

At the hospital, Sir Geoff was greeted by chief executive Karen James and NHS trust chairman Paul Connellan. After unveiling a plaque he met mums-to-be and staff. The unit offers care, guidance and support for expectant mothers and incorporates the most up-to-date equipment.

On his visit to Hyde United, Sir Geoff saw a game of walking football and met the club’s manager, Darren Kelly, and members of the Hyde United Academy. He was also able to see the state-of-the-art 3G synthetic pitch Tameside Council has installed at Ewen Fields to increase the ground’s use as a community facility.

The day ended with an extraordinary meeting of Tameside Council at which Sir Geoff was made a freeman of the borough – an honour conferred only 12 times since Tameside was created in 1974. He was presented with a framed scroll and a silver salver.

In her remarks, the Civic Mayor of Tameside, Cllr Joyce Bowerman, not only recalled Sir Geoff’s achievements when England won the World Cup, but highlighted his distinguished record of charity work. He is currently working with the Alzheimer’s Society as three of the 1966 team have the disease.

The Mayor commented: “It’s a mark of Sir Geoff, as a footballer and as a man, that he has always been prepared to help others and has never forgotten the people with whom he played the game, especially in that glorious summer of 51 years ago.”

Responding, Sir Geoff said: “I’m very proud to be associated with this borough, where I was born. I’m very proud of the area, of my father and grandfather who lived up here, and of my aunty. I recall many, many happy and enjoyable visits. Thank you very much for this award.”

Sir Geoff Hurst was born at Tameside Hospital’s forerunner, the old Lake Hospital, Ashton, in 1941. He lived on Ruby Street and Cemetery Road, Denton, and attended St Lawrence’s School, Stockport Road, until the family moved to Chelmsford in Essex when he was eight.