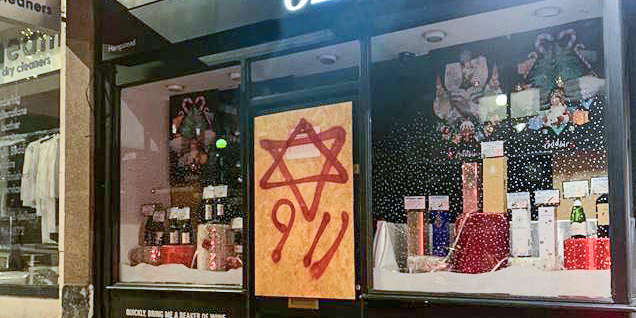 2019 saw a record high total of 1,805 antisemitic incidents in the UK last year according to figures released today by Jewish charity the Community Security Trust.

Almost two thirds of the 1,805 antisemitic incidents were recorded in Greater London and Greater Manchester, the two largest Jewish communities in the UK.

The incidents were spread throughout the year, with over 100 incidents recorded in every month for the second consecutive year; indicating that a general atmosphere of intolerance and prejudice is maintaining the high incident totals, rather than a one-off specific ‘trigger’ event.

However, the highest single monthly totals in 2019 came in February and December, both months when the problem of antisemitism in the Labour Party was the subject of sustained discussion and activity: February because of the resignation of several Labour MPs to form Change UK, some of whom cited antisemitism as one reason for their decision; and December saw intense focus on the issue of antisemitism during the General Election campaign.

CST Chief Executive David Delew said:
“2019 was another difficult year for British Jews and it is no surprise that recorded antisemitic incidents reached yet another high. It is clear that both social media and mainstream politics are places where antisemitism and racism need to be driven out, if things are to improve in the future.”

Home Secretary, Priti Patel MP said:
“It’s appalling that we have seen another increase of sickening abuse against the Jewish community. We need to do much more to tackle antisemitism and the intolerance this creates across society. As Home Secretary I am pushing for greater collaboration, both across government, policing, the courts and community groups, to remove this shameful stain on our society.”