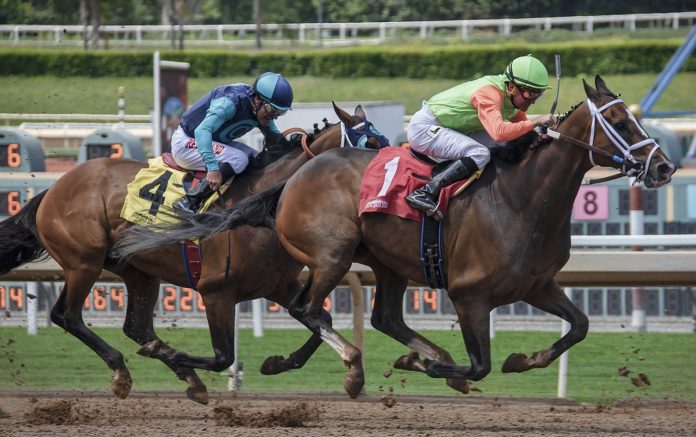 Lancashire’s Haydock Park is readying its 120-year-old racecourse for the start of the UK jump horse racing season. Haydock Park, situated just 20 miles west of Manchester city centre, marks the beginning of the National Hunt racing across the UK, with the Betfair Chase scheduled as the first of three chases that make up The Jockey Club’s Chase Triple Crown. Tickets are already on sale for Haydock’s ticketed enclosures, with prices starting from just £10 per person.

The Betfair Chase is a Grade One race, which means it always entices the leading steeplechasers in British and Irish horse racing. Last year, the jump season started in dramatic fashion as Bristol De Mai upset the form book to secure back-to-back Betfair Chase victories, pipping Gold Cup champion Native River and pre-race favourite Might Bite to the finishing post. It’s not yet known whether Bristol De Mai will return to the fold next month to try and make it a hat-trick of victories.

Paul Nicholls-trained Frodon and Clan Des Obeaux are the two main horses talked about by the leading horse racing pundits when it comes to bidding for The Jockey Club’s £1 million Chase Triple Crown in 2019/20. Kauto Star, also trained by Paul Nicholls, is still the only horse ever to have won the Chase Triple Crown, which also includes the King George VI Chase and the Cheltenham Gold Cup.

Clan Des Obeaux appears to be Nicholls’ best chance of achieving the Chase Triple Crown once again, with most bookmakers giving Clan Des Obeaux the shortest price of 50/1 to win all three Grade One chases. The fact that no-one has come close to emulating Kauto Star in the last 13 years further serves to underline how special he was to British jump racing.

Those looking to put their glad rags on for the race day can purchase exclusive tickets to Haydock Park’s Premier Lounge, which are available for £60 per person. These tickets offer uninterrupted views across the Winning Post, whilst affording you access to your own private bar and balcony.

There are plenty of facilities outside of the Premier Lounge too, with a Moet et Chandon Champagne and Seafood Bar, along with Harry’s Bistro restaurant for a more civilised dining experience. Public transport to Haydock Park is relatively straightforward. The racecourse is situated in Newton-le-Willows, which has its own train station, served by Manchester Piccadilly, Victoria and Oxford Road. Complimentary shuttle buses are operated from Newton-le-Willows station from two hours prior to the first race of the day and plenty of return journeys after racing.