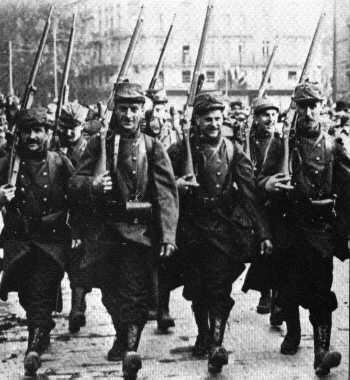 The previous day, German troops had crossed the border into France and at seven o clock on the evening of 3rd August, had demanded that Belgium agree within 12 hours to allow free passage to her troops.

Belgium, backed by the 1839 Treaty of London which guaranteed her neutrality and had been signed by Britain, Prussia, Austria, France and Russia refused.

In Manchester, amid scenes of great enthusiasm, a big party of naval reservists left London Road Station for Plymouth and Devonport. As the two trains pulled out there were great cheers from the crowds of relatives seeing them off.

It was of course Bank holiday, and despite the rain as a heavy storm crossed Manchester in the late morning, crowds were at old Trafford to watch the Roses Match.However, the rain and then the impeding conflict intervened with AH Hornby called away on urgent business. The Lancashire captain was to help the government as a agent for the purchase of horses for the cavalry as he was a prominent member of the Cheshire hunt.

The weekend was the busiest on record for suburban grocers with panic buying seizing the better class districts of Manchester with tremendous demand for flour sugar and bacon amid fears of rising prices.

The Bushop of Manchester prayed for peace in front of large crowds on Blackpool pleasure beach and it was the second day of the Weaste carnival on Salford’s football ground with over six thousand in attendance.

The Evening News reported from the continent of skirmishes on the Franco German frontier and a German cruiser was bombarding the Russian port of Libau.

The action that was to bring Britain into the war was beginning as a strong force of German cavalry advanced towards the South East of Belgium as the county refused Germany’s offer of an entente on condition that it allowed its troops to cross the country.

There were reports that German troops were just twelve miles from Liege, while, Sir Edward Grey told parliament that it was clear that the peace of Europe could no longer be preserved.

The war office gave orders for training camps to be closed and Territorials to return to barracks. The Manchester ninth regiment, who were due to go to Carnavon for a fortnights training were told this had now been cancelled.

Crowds, said to be in thousands, gathered outside the offices of the Manchester Guardian waiting for news with the newspaper sellers doing a roaring job.

In the Footsteps of Dracula,Wordsworth and Austen