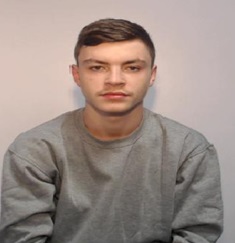 An 18-year old man has been jailed for life for the murder of Luke Fleming.

Mitchell McGivern of Dowley Gap Road, Worsley, was sentenced today at Manchester Crown Court to life with a minimum term of 21 years in prison for deliberately driving a car into two men riding a motorbike in Salford.

McGivern was unanimously found guilty by the jury of murdering 20-year-old Fleming ,– who was sat on the pillion of the motorbike, and also attempting to kill the 23-year-old driver of the bike.

The court heard that McGivern had had previous altercations with Fleming and the 23-year-old driver and intentionally targeted the bike they were riding.

Mitchell McGivern was driving a blue Fiat Sedici behind a black motorbike on Eastham Way, Little Hulton last May.

The 18-year-old was travelling at speed behind the vehicle that Fleming was on-board before accelerating into the back of it and shoving it off the road and into a petrol pump on a garage forecourt.The collision was with such force that it left the bike wedged into the front of the car.

McGivern and the two people he was travelling with fled the scene on foot leaving the driver of the bike on the pavement and Fleming with serious head injuries.

Luke Fleming was taken to hospital but sadly passed away six days later due to his injuries.

Mitchell McGivern was arrested just over a week later on suspicion of murder.

Senior Investigating Officer Duncan Thorpe, of GMP’s Serious Crime Division, said: “Today’s result comes at the end of a dedicated investigation into the incident from May 2019 and we are relieved that justice has ultimately been served.

“This was a sickening incident that has caused immense distress and agony for the family of a young man who was so cruelly murdered.

“Our thoughts remain with Luke’s family and we hope that as a result of today’s verdict they are able to find some closure.”