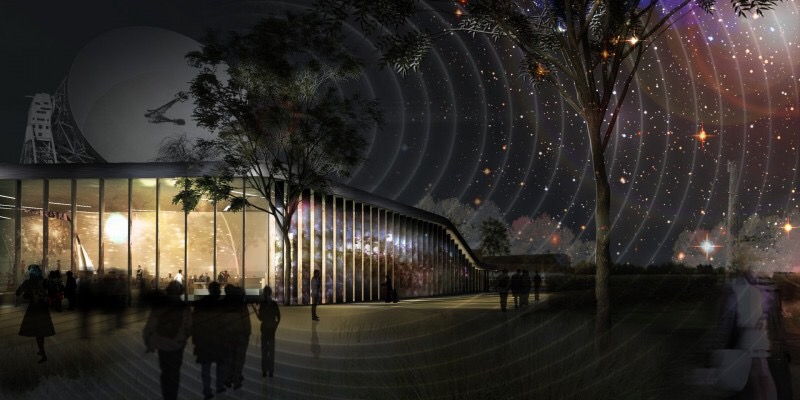 When completed, the building will be able to hold up to 135 staff, providing research and office space as well as catering facilities for the organisation that will supervise the international effort to build and operate the world’s largest radio telescope

Cheshire East Council has approved the application for the erection of new single storey research and administration building and associated landscape, car parking and road works connecting to the existing building. The proposed design takes inspiration from the radio waves that are at the heart of the SKA’s work, while embracing its natural environment.

Early works are due to start in December, and construction is expected to last around 12 months. . Due to its international status, the building will also include a council chamber for representatives of the inter-governmental organisation’s Member States to meet in, which will double as an auditorium for science conferences and public lectures.

“The University of Manchester’s Jodrell Bank site is iconic for radio astronomy, and is much loved by the general public, who visit the Discovery Centre in their tens of thousands every year. We were delighted when the decision to host the SKA Headquarters at Jodrell Bank was made in 2015. Our astronomers and engineers are playing a significant role in this revolutionary new telescope, and obtaining planning permission for the new building is a key milestone – we very much look forward to seeing the development move forward over the next year.”

Professor Stephen Watts, Head of the School of Physics and Astronomy

The SKA Headquarters building sits alongside the University of Manchester’s Jodrell Bank Observatory. The University is playing a significant role in the international SKA project. Astronomers in the Jodrell Bank Centre for Astrophysics played an important role in contrubuting to the science book for SKA, describing how this telescope will be a revolutionary facility for radio astronomy.

Additionally, researchers in the University’s School of Physics & Astronomy lead the international group working on the Signal and Data Transport for the telescope, and are members of four of the other nine international groups conducting detailed design work.

Signal and data transport is the backbone of the SKA telescope, including a network to take astronomical data from the antennas to the computer facility, a network to distribute synchronisation signals from very accurate atomic clocks to each antenna, and a network to allow telescope control and monitoring information to flow throughout the whole SKA system.

The University of Manchester leads the Non-Imaging Processing sub-tasks required for Pulsar searches and Pulsar timing experiments, key research areas at Jodrell Bank, and the University’s School of Electrical and Electronic Engineering is also leading work on a novel type of radio receiver element, an Octagonal Ring Antenna (ORA).

Take a selfie with Emmeline Pankhurst!