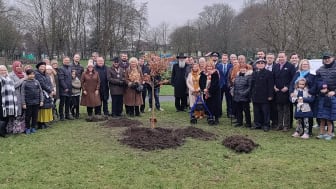 A native oak tree has been planted at Whitefield’s Hamilton Road Park to mark the 80th anniversary of the Association of Jewish Refugees (AJR) – the national charity providing social and welfare services to Holocaust refugees and survivors in the UK.

This is part of the 80 Trees for 80 Years campaign under which native oak trees will be planted around Britain in honour of people and places that symbolise the enormous contribution made to every walk of British life by refugees who escaped from Nazi Europe.

This site was chosen by Francoise Robertson who had spent a lot of time in the Greater Manchester area, and particular Bury, with her son having married a Bury resident. At the event, Francoise talked about her own experiences and those of her parents who were Jewish refugees during the Second World War. These experiences included losing relatives during bombings, and barely surviving a bombing herself (having to be thrown over a hedge as a newborn), and the struggles of finding a safe passage to the UK.

Michael Newman OBE, CEO of the AJR, said: “The tree planting marks the heritage of our members and a place of historic interest associated with them. It enables the AJR to give back to and create a living legacy within the country that became home to the Jewish refugees.”

Councillor Eamonn O’Brien, leader of the council, said: “It was an honour to have the tree planted in Bury, as not only does it recognise the great work the AJR does across the country but recognises the great contribution to Bury made by Jewish refugees and Jewish people as a whole.”

The tree will now be a focus for telling the story of Britain’s Jewish refugees and celebrating their remarkable contribution to British life. It will also form part of The Queen’s Green Canopy – the unique tree planting initiative which is marking Her Majesty’s Platinum Jubilee and whose organisers have adopted the AJR’s project as a “wonderful initiative”.