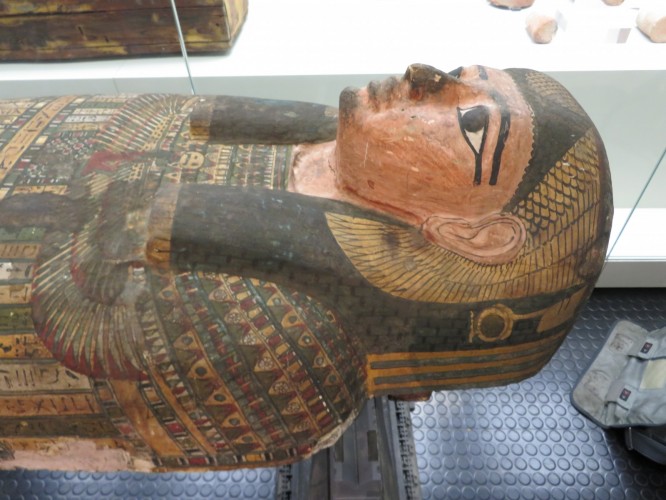 A new book published today explains how the famous mummy Takabuti was likely to have been murdered over 2,600 years ago.

Editors Professor Rosalie David from The University of Manchester and Professor Eileen Murphy Queen’s University Belfast, say a military axe was probably used from behind as she was running away from her assailant.

According to the team’s latest research, the most likely weapon was an axe rather than a knife as previously suggested.

The killer could have been an Assyrian soldier, they say, though the axe was also a key weapon for the Egyptian army, so she may have fallen victim to one of her own people.

Holding an axe with his arms bent to give the murderer maximum force for the thrust into her ribs causing terrible injuries, death was probably instant.

The weapon , which has a blade with a semi-circular sharp edge at least 7–7.5 cm in length, corresponds to the injuries she sustained.

The book, called The Life and times of Takabuti in ancient Egypt: investigating the Belfast mummy, is published by Liverpool University Press.

A range of techniques, including DNA analysis, x-rays, CT scans, analyses of the hair and mummification packing materials, proteomics and radio carbon dating, were all used on tiny fragments of material.

This enabled the teams at The University of Manchester and Queen’s University Belfast to unravel the mystery of Takabuti’s life and times.

Analysis of the CT scan of Takabuti’s body revealed that she had died as a young woman in her late 20s or early 30s. Proteomics revealed no evidence of ongoing illness.

Takabuti’s title, written on her coffin, indicates that she was a married woman who supervised a substantial household – probably at Thebes – where Luxor is today.

Professor Rosalie David is an Egyptologist from The University of Manchester’s KNH Centre for Biomedical Egyptology.

She said: “It is somewhat comforting to know that Takabuti’s death- though violent, was quick and she probably didn’t suffer for long.

“But Ancient Egyptians often survived until middle age, so the tragedy of her death at such a young age is stark. We’ve worked so much with her, it’s hard not to feel close to her as a person.

“And she was probably much loved by her family: her body was tended to with great care after she died: her hair was neatly cut and was carefully curled and styled”.

“Because we have been able to identify the shape of the wound and the angle of entry of the murder weapon, we think an axe was probably responsible.

“It is, however difficult to be absolutely definitive because the morphology of the wound has been significantly distorted.”

Professor Eileen Murphy added: “This book is the result of several years of painstaking work. It adds to our understanding of not only Takabuti, but also wider historical context of the times in which she lived.

“And the cutting-edge scientific analysis we employed- demonstrates how new information is accessible thousands of years after a person’s death.

“Our team – drawn from a range of institutions and specialisms – was in a unique position to provide the necessary expertise and technology for such a wide-ranging study.”

The project was supported by funding from Friends of the Ulster Museum. Kingsbridge Private Hospital facilitated the work by providing their expertise and use of a portable x-ray machine to aid sampling for DNA and other work.