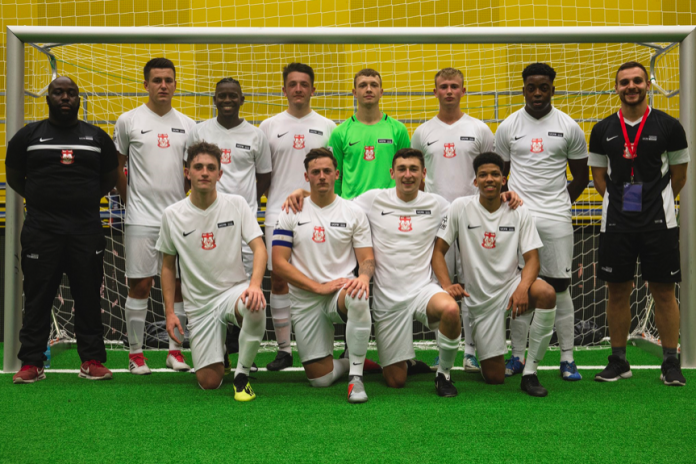 A TEAM of students from Manchester reached the quarter finals of the Mini Football U21 World Cup.

The team of footballers from UCFB (University Campus of Football Business) represented Great Britain in the tournament and got to the last eight of the prestigious competition after finishing second in the early group stage.

Great Britain’s forward – Henry Limpitshi Bongwanga – a student from UCFB’s Manchester campus- was also voted Striker of the Tournament. (Located far-right on the back row of players in the photograph).

The students from the organisations Manchester Campus represented Great Britain on the world stage, from the 4th- 8th October in the Czech Republic.

Great Britain faced Slovakia in the quarter final and after a nail- biting performance, unfortunately Great Britain’s tournament came to an end, with the score line finishing 6-4 to the Slovakians.

The previous competition took place in Prague, with Great Britain securing two convincing victories over India and Guatemala. The quarter finals then commenced on the afternoon of the 6th, with the top two teams from each group in the initial phase of the competition, progressing to the next round.

Mini football is a scaled down version of the conventional sport. The goals, the pitch and the number of people per team are all significantly reduced in size, resulting in a fast paced and exhilarating spectacle. It is open for all players without a professional football contract and it is reckoned to be the largest amateur sport in the world, being played by millions of people globally.

The Mini Football World Cup takes place every two years and focuses predominantly on player development, team building and fair play, with a view to enhance international relations and contribute to the positive development of society.

Mini football is promoted and moderated by the World Mini Football Federation (WMF), which is a non- profit organisation, seeking to encourage growth in order to expand their current position within 100 countries and five continents.

Mike Heald, Sport and Enrichment Coordinator at UCFB in Manchester said: “UCFB is extremely proud of all the Mancunian students who were selected to represent the nation and that they are a credit to the institution and to themselves.

“All individuals involved, whether that be players or coaches, were thrilled to be a part of such an exciting and prestigious event and they were delighted to represent the institution in the world games, elevating the status of the organisation and upholding the outstanding repute of UCFB”.

The host nation, Czech Republic, beat Slovakia 2:1 in the final proving that they are a dominant force in the sport. The Czech Republic are also reigning European and World Champions in the senior division, after triumphing over the United States in the recent 2017 senior World Cup.

Henry Limpitshi Bongwanga, of Great Britain and the UCFB Manchester Campus, had a particularly strong tournament, scoring 12 goals for the side and being named Best Striker of the competition for his outstanding performance and finesse.

Heald added: “Henry is a very talented player and deserved all he got. We are all very pleased that he has been recognised for his ability on the field and proud of all the talent that have represented the institution”.