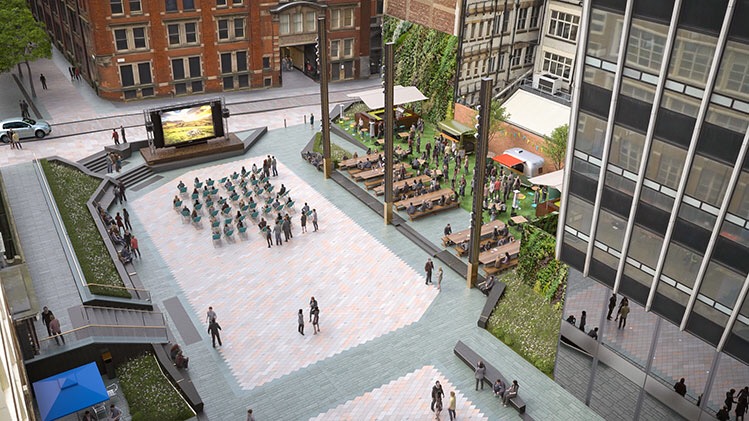 Residents of Manchester are being invited to name the new public square taking shape in the NOMA neighbourhood.

The new development will create a public area between the iconic CIS Tower, New Century House and Hanover near Victoria Station, ultimately providing a safe and welcoming space that will over time create a mix of cafés, restaurants, bars and shops nestled amongst the characterful buildings that form the NOMA listed estate.

The square will be officially opened in October 2015, and the developers are asking for suggestions to be submitted by 28 July. Shortlisted names will then be submitted to an expert panel, who will consider each of the entries for their originality and rationale. The favourite suggestions will be rewarded with an afternoon tea and ‘bubbles’ for two at Teacup Kitchen in the Northern Quarter.

“This is a great opportunity for the local community to play a real part in creating the latest piece of Manchester’s history. 4,000 postcards are being delivered to homes and businesses in and around NOMA encouraging them to get involved, and we really hope to get a great response. NOMA is an area with a rich and vibrant heritage, and we want the people who live, work and enjoy themselves here to become a part of its future.”

You can submit your ideas in a variety of ways: On Twitter it’s @NOMA_mcr #NameOurSquare ; on Facebook NOMAmcr #NameOurSquare ; submit via e-mail at NOMA@co-operative.coop or submit online www.nameoursquare.com . Alternatively you can drop your suggestions in at the reception of 1 Angel Square.