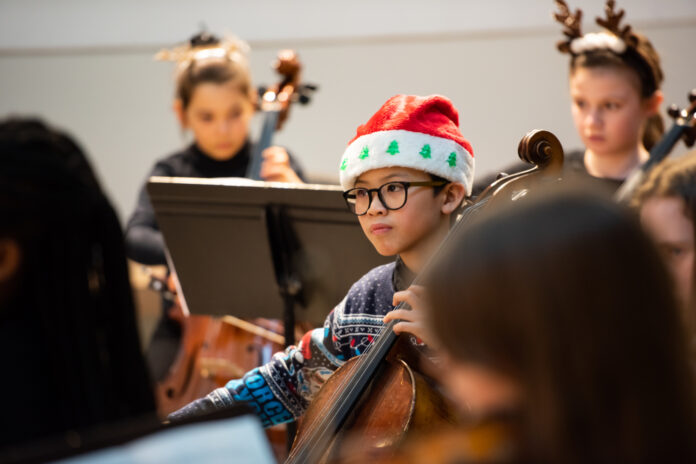 Young musicians at Chetham’s School of Music are sharing a major new Christmas concert with schools across the UK, in a bid to bring children back together through music after a year of social distancing and isolation.

The large scale Christmas concert is performed by the Chetham’s Symphony Orchestra, ensembles and choir, with contributions from three other schools across the north west.

The concert features much loved festive favourites, from hits such as White Christmas to carols like Hard The Herald, and even a Christmas Samba.

Children across the nation are now being invited to watch and samba along, or create their own festive samba in response.

Chetham’s, the UK’s largest specialist music school, is providing expert musical teaching support and guidance to all participating partner schools as part of the initiative.

Tom Redmond, Joint Principal at Chetham’s School of Music, said: “This has been a truly heartwarming project. The music is beautiful. Congratulations to every member of Chetham’s Symphony Orchestra, our choir, and our ensembles of our remarkable young musicians, as well as children across our region. We hope it inspires many more. This is what Christmas is all about.

“It’s been hard for everyone since schools returned in September. We’re extremely fortunate at Chetham’s that we’ve been able to continue offering a very broad musical provision, and in the absence for many of concerts, school trips and festive musical merriment we just wanted to share a moment of musical joy.”

The free concert, A Chetham’s Christmas, is available for everyone to watch in full here: https://outreach.chethams.com/a-chethams-christmas/

As well as the major schools project, Chetham’s students will also perform two live broadcast concerts from The Stoller Hall for public audiences this Christmas season.

Chetham’s Jingle Brass and Jazz concert will be streamed live on Tuesday 15 December, featuring the big brass sounds of Ding Dong Merrily on High and a jazz interpretation of Sleigh Ride by the Ronettes.

On Thursday 17 December, Chetham’s Christmas Chorus will be joined live on The Stoller Hall stage by special guest, British actor and author Clive Mantle (Game of Thrones, Casualty), who will be reading festive poetry and prose as part of the carol concert, conducted by Chetham’s Head of Vocal Studies, Marcus Farnsworth.