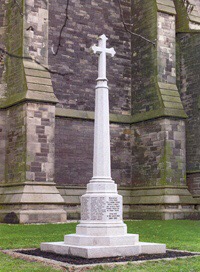 A granite memorial to over 100 Salford men who died in the First World war has been given national recognition.
Salford City Council has welcomed the news that Worsley’s war memorial has been listed by Historic England as part of a national project to protect war memorials.

The Cornish granite stone cross, which stands near the west door of Grade I listed St Mark’s Church, Worsley, has now become a Grade II listed monument. It was raised by the local community and unveiled on April 10, 1922 by the Earl of Ellesmere to commemorate 103 local servicemen who died in the war.
Councillor Derek Antrobus, lead member for planning and sustainable development said: “The loss of so many local young men must have been devastating for the small community of Worsley at the time. The village created an elegant tribute to them to show they will never be forgotten.

“It’s an unusual monument among First World War tributes as the names of those who died in World War II were not added to it later on. I’m delighted it has been listed as this supports all Salford City Council has done to remember the anniversary of the First World War.”
The stone cross has stands on an octagonal plinth and the names of the fallen are inscribed around the faces. The dedication is on the front face of the plinth in Gothic script and reads:

REMEMBER/ BEFORE GOD/ THE GALLANT DEAD/WHOSE NAMES/ ARE WRITTEN HERE/ THOUGH MANY LIE/ IN OTHER LANDS/ THEY FELL/ IN THE GREAT WAR/ 1914 – 1919.