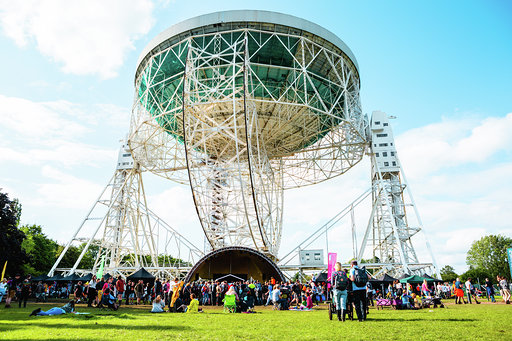 bluedot have revealed their first wave of science names for this year’s festival, joining a weekend of music and cosmic culture at Cheshire’s Jodrell Bank Observatory that includes already-announced headline appearances from Björk, Groove Armada, Metronomy and countless more.

This year’s extensive science line-up features headline talks from astronaut Tim Peake and Ann Druyan (co-creator with Carl Sagan of the legendary Cosmos TV series, Contact, and the Creative Director of the NASA Voyager missions), alongside a special Thursday night Opening Concert of The Hallé performing a unique live score to the original Cosmos series. Ilan Eshkeri, in collaboration with the European Space Agency, will present Space Station Earth – a brand new immersive show which allows the audience to experience space travel through the eyes of an astronaut.

Tim Peake’s appearance at bluedot will include an exploration of his time aboard the International Space Station, and the role of the European Space Agency in the future of space travel.

Ann Druyan’s extraordinary story as the co-creator of Cosmos and the film Contact, alongside her late husband Carl Sagan will be the subject of an exclusive In Conversation at the festival, discussing her fascinating career as an Emmy Award-winning writer and producer and director of the two most recent seasons of Cosmos, as well as the Creative Director behind NASA’s Voyager Interstellar Message Project.

The 1977 project, which sought to distil the essence of all that it is to be ‘human’, included the curation of the Golden Record – a compilation of sounds, greetings, songs and performances – which were cut onto a single record and sent aboard each of the two Voyager spacecraft on a mission circumnavigate the Milky Way galaxy for the next one to five billion years.

Exploring humanity’s humble position in the universe amid the awe-inspiring scale of outer space, Druyan’s career has been intertwined with the work of her late husband since the 1970s; the Pale Blue Dot of Sagan’s 1994 book was based on a photograph taken by Voyager 1 thirty years ago this month, and which later became the inspiration behind the bluedot festival name.

Space Station Earth is a spell-binding new show which allows the audience to enjoy an immersive experience of life in space – all through the eyes of an astronaut. In space astronauts all share a similar shift in consciousness, it’s often called the Overview Effect.

Astronauts very quickly learn and appreciate how everything on earth is connected – land, oceans, weather systems and people, and how we need to protect and look after our home. Space Station Earth, a unique and immersive cinematic experience for all ages, offers all of this – an unimaginable journey into space, using real footage and images while at its core supporting and celebrating the closest we have to actual super heroes – astronauts.

Returning speakers include Chris Lintott of BBC’s The Sky At Night, Libby Jackson of UK Space Agency, and Open University’s Monica Grady. Additionally, Yan and Noble from the Mercury Prize-nominated British Sea Power are set to perform a special live soundtrack to Out Of The Present as part of the festival’s film programme.

The feature film, covering the story of the Mir space station in the context of the Soviet Union’s collapse, previously received the live soundtrack treatment from the UK band at an exclusive concert at the Large Hadron Collider at CERN.

Weekend tickets for bluedot 2020 are on sale now from discoverthebluedot.com.