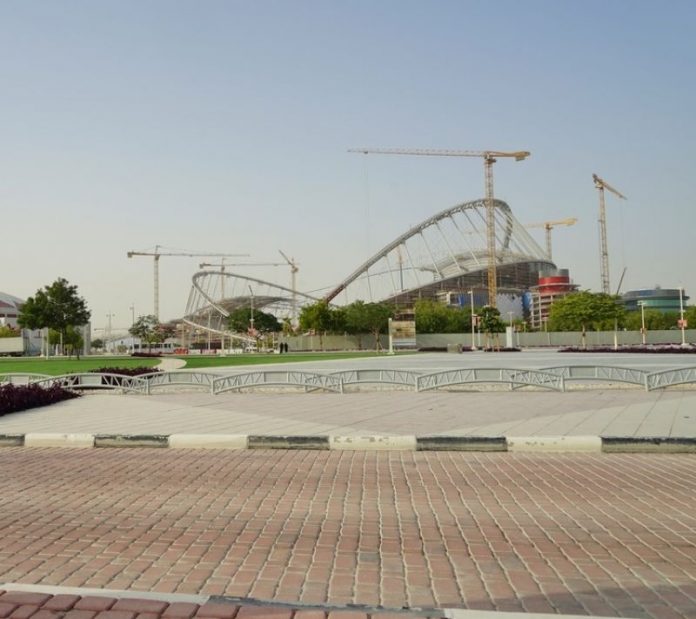 THE MANCHESTER premier of a film documenting the lives of migrant workers building infrastructure for the 2022 football World Cup will be hosted by the University of Salford later this month.

Being shown at the MediaCityUK campus, The Workers Cup depicts the life of some of the 1.6 million labourers who are building infrastructure and stadia in Qatar ahead of the event.  The men work long hours for low pay and live in isolated camps. It will be one of the only chances to catch the film on a big screen outside of London before its public release this Summer.
Sixty percent of Qatar’s total population are labourers. From India, Nepal, Bangladesh, the Philippines and Africa, some of the world’s poorest people are working the lowest level jobs to ensure the World Cup can be hosted in the world’s richest country.
Rosie Garthwaite, one of the producers of the film, said: “The Workers Cup is a feature-length documentary giving voice to the men who are working to build sport’s grandest stage.
“We had unprecedented access. We focus on a select group from one of the camps who have been chosen to compete in a football tournament for labourers: The Workers Cup.
“Over the course of the tournament we follow the men as they alternate between two extremes: they play heroes on the football pitch, but are the lowest members of society off of it. This results in a terrible toll to the psyche of the men, as they are depleted of the hope that motivated them to come to Qatar in the first place.”
The film has not been banned in Qatar and is a realistic portrait of life for the workers, showing positive as well as negative aspects of their lives.
Simon Chadwick, Professor of Sports Enterprise at the University of Salford Business School, who organised the screening, said: “We are pleased to able to screen the film as it will be one of very few opportunities to see it outside London.
“Clearly, there is considerable controversy around Qatar’s staging of the 2022 World Cup. However, the film helps to dispel some myths but also to provide audiences with an opportunity to view migrant workers, Qatar and the World Cup in a different way.
“For anyone who truly cares about sport and its contribution to our world, the film is therefore essential viewing. After the screening, we hope that the Q&A session, which will involve a series of prominent figures linked to issues raised by the film, will provide further insights into what has become in recent years one of world football’s most emotive issues.”
The Workers Cup will be shown on Tuesday, February 27, 18:30 – 21:00 GMT on the University of Salford MediaCityUK campus. The event is free but tickets must be booked from the Eventbrite page.