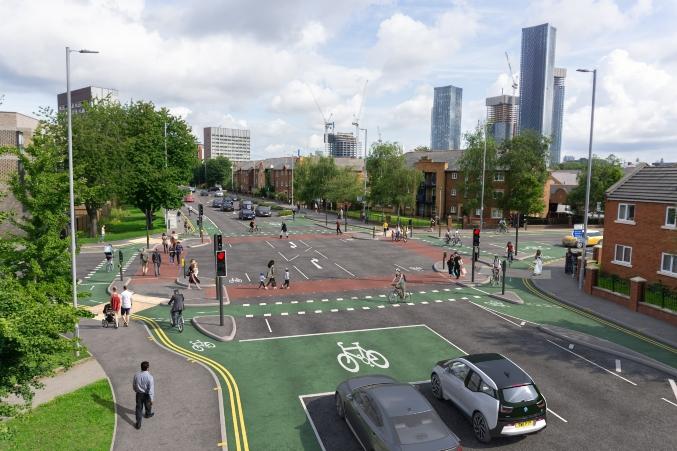 Work to create an innovative “CYCLOPS” junction as part of the new Manchester to Chorlton walking and cycling route is due to start on Monday.

The “Cycle Optimised Protected Signals” junction, at Royce Road, is a UK-first. It is an “orbital cycle route”, separating cyclists from motor traffic and providing more space for pedestrians, reducing the possibility of collisions or conflicts with traffic.

To enable construction work to go ahead, the Royce Road junction will be controlled by temporary traffic lights from Monday, for approximately six weeks, for 24 hours per day. These temporary lights will be manually controlled during peak hours. Each of the four arms of the junction will have a single lane remaining open during the work..

A consultation for the Manchester to Chorlton walking and cycling project was conducted in summer 2019, which received more than 1,800 responses and found that a majority of people were in favour of the scheme. Work on the route started in November 2019 and has to date focused on the area from the Chester Road roundabout up to Stretford Road, where segregated cycle lanes are being created.

Union disappointed with the Government’s response to a House of Commons debate on Shop...