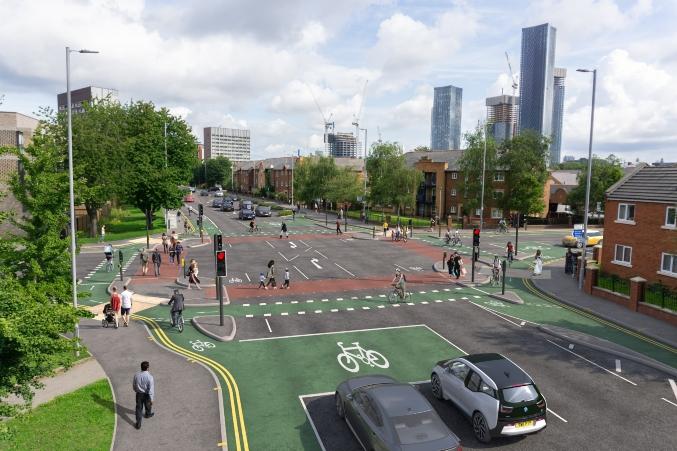 Work on the first phase of a new walking and cycling route from Manchester city centre to Chorlton is set to start later this year, after a consultation revealed broad public support for the scheme.

Following a review of the consultation’s findings – which found that around 70 per cent of more than 1,800 responses were supportive of the scheme – the Chester Road to Stretford Road part of the route is to be constructed, including the creation of an innovative CYCLOPS junction at Royce Road.

Engagement events will be held for local residents and businesses prior to the start of work, which is expected to commence before the end of 2019.

The Stretford Road to Seymour Grove section of the route will now be progressed to a detailed design stage, with the Brooks Bar junction design being subject to a review of its potential impact on the local road network, in line with comments received in the consultation.

Plans for the sections of the route stretching from Seymour Grove to Hardy Lane are to be reviewed, in response to comments received from residents and Chorlton businesses.  Work on this part of the route is provisionally due to start in summer 2020.

An overall review of the impacts on parking along the route will be carried out to identify potential parking mitigation measures, a process which will continue throughout the development of the scheme. Proposed one-way streets at Ollerton Avenue and Ashley Avenue are to be removed from the plans, in response to concerns raised by residents.

Greater Manchester’s Walking and Cycling Commissioner, Chris Boardman, said: “I’m thrilled that the first phase of works will begin before Christmas. Royce Road will be the first junction if its kind in the UK to use an orbital cycle route that separates cyclists from motor traffic, making it safer for all users.  Chorlton to Manchester has the potential to be a world-leading cycling and walking route and I know that when complete it will be transformational, enabling thousands more people to leave their cars at home.”