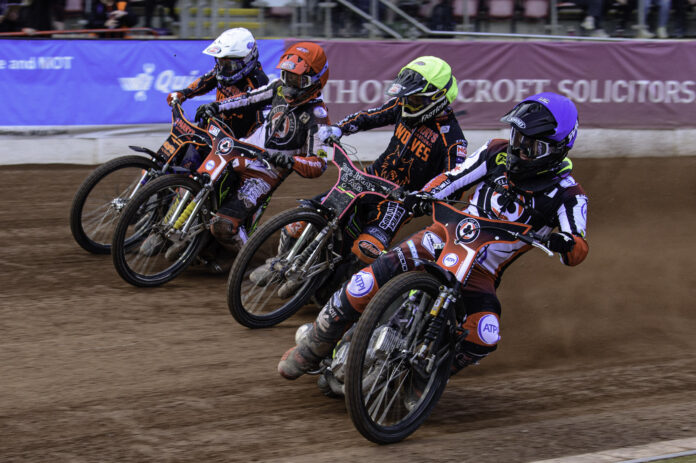 After powering to a 51-39 victory at the National Speedway Stadium, Belle Vue finally broke the crux and put an end to Wolverhampton’s near three-year winning streak against them.

Both sides had every reason to be confident going into this critical meeting, with the Parrys International Wolves known to travel well and the ATPI Aces gaining momentum at home.

Early doors, it looked to be shaping up to be a repeat of the visitors’ League Cup success after former Belle Vue rider Steve Worrall teamed up with Sam Masters for a first heat 5-1.

But the ATPI Aces were men on a mission and were quick to respond and lay down their intentions for the visitors just two short heats later.

Matej Žagar, again, proved nigh untouchable by an opposing rider from start to finish and joined forces with Charles Wright in Heat 3 to bring the lead back to the home heroes.

From there, it was all over but the crying for the Wolves as they failed to reel in the rampant ATPI Aces, who went on to dominate with very little resistance.

Maximum man Žagar said: “Before the meeting, we were speaking on the track walk and the boys were saying how we hadn’t won against Wolverhampton for some years.

“So this was a great turnaround for us today. We won the meeting by a significant amount and that’s the main thing for us, to keep winning especially at home.

“This track is a place that everyone loves racing and a lot of the time it is 50/50 who will win, but I think we’re getting pretty dialled in now, we’re gating and we’ve got some good speed.

The ATPI Aces travel to Monmore Green next Monday, June 20 with our next dose of Speedway in Manchester coming on Friday, June 24.

On-Form Tungate Out To Prove A Point