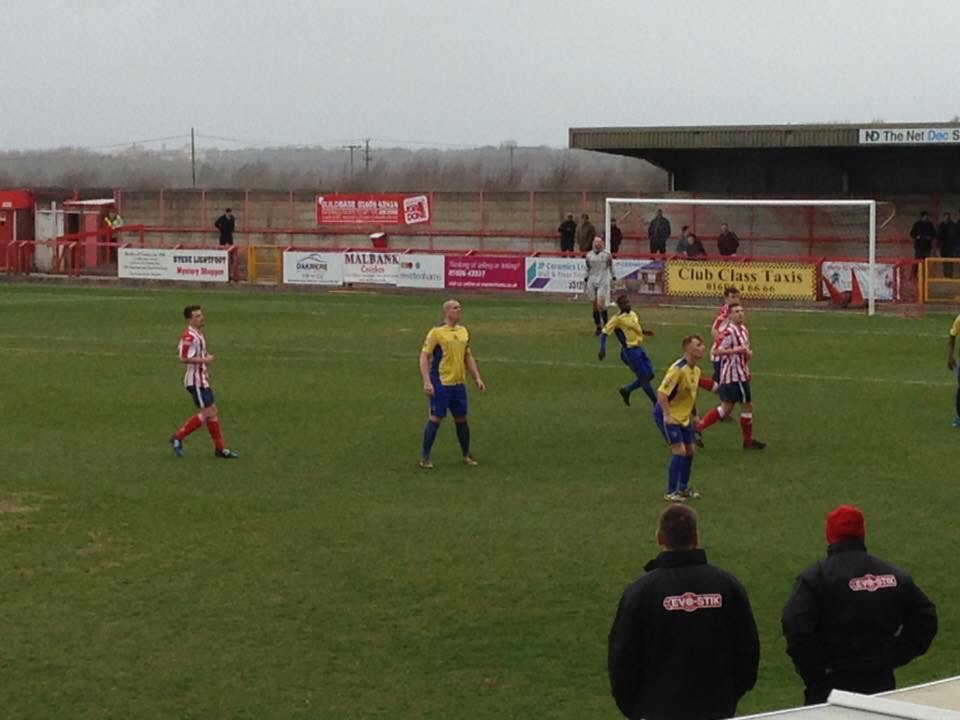 Droylsden’s winning run came to an end at a wind swept and rain lashed Wincham Park on Easter Saturday with the home team extending their own winning run to three games.

The Bloods were forced into one change from their win against Bamber Bridge last Saturday with new signing Yomi Samuels coming in in place of the suspended Domaine Rouse.

Both teams struggled with the wind in the first half, Bloods kicking into it, but the deadlock was broken when Lewis Fielding let a cross from a Danny Andrews free kick slip through his hands for Michael Wilson to help the ball over the line, Fielding’s efforts hampered by the wind.

Ten minutes later the Bloods were two goals down, an Anthony Gardner free kick was met by the head of Rob Hopley and looped over Fielding.

The Bloods had few chances in the first half and rarely troubled the home team’s defence.

The elements conspired against Droylsden in the second half, heavy torrential rain changing the wind direction.

On fifty eight minutes they found themselves three down, Rob Hopley scoring his second at the far post from a Danny Andrews cross and four minutes later the game was dead and buried when a Jeff King cross caught the wind and looped into the far corner of the goal.

Bloods brought on Carlos Rouse, Mike Pino and Jordan Bove for Danny Parkinson, Luke Daly and Brandon Zibaka and after seventy four minutes forced the Danny Roberts in the Witton goal into his first save, a low drive from Yomi Samuels turned around the post for a corner.

That was probably the highlight of the Bloods attacking and Rob Hopley had a great chance for his hat trick deflecting substitute Joe Newton’s cross just wide of the post.

Live like a goat with some help from Salford prosthetics expert