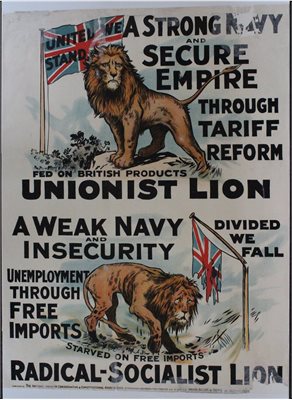 More than one hundred posters from the 1910 elections will be saved from deterioration thanks to new funding.

Wigan Council’s archives and local studies team has secured more than £8,000 from The National Manuscript Conservation Trust and the Pilgrim Trust to conserve 141 posters, 55 of which are directly linked to local and nearby constituencies including Wigan, Ince, Chorley and Newton.

The conservation project, ‘Posters, Power & Parliament: The Wigan Borough 1910 General Election Collection’, will allow the council to restore and digitise the posters, which are almost 110 years old, preventing them from crumbling away and becoming completely inaccessible.

Alex Miller, lead officer for archives and local studies at Wigan Council said: “This collection is of national, as well as local importance. It includes electoral campaign material that has not survived elsewhere and helps to chart the history of our democracy.

“With the kind support of The National Manuscript Conservation Trust and the Pilgrim Trust, it has been possible to professionally conserve and restore the posters, making them available to researchers for the first time.

“I would encourage anybody to take a few minutes to look at the first batch of images we have managed to digitise, as not only do they give a unique insight into political views at the time, but there is also a series of coloured, pictoral posters that resemble cartoons – a very different approach to what we would see today.”

The year 1910 was one of the rare occasions where two elections were called in one year. They were a consequence of the House of Lords refusing to pass Lloyd George’s Peoples Budget of 1909.

The main points at issue were reform of the House of Lords, free trade, the rights of working people and Irish Home rule – all of which are illustrated in the campaign posters.

Consumers on a countdown to Xmas as retail sales rise

Letters of love for Ukraine