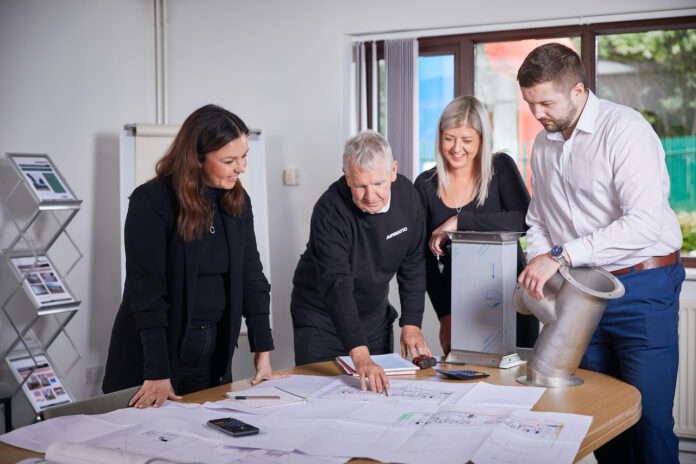 There are more women in engineering roles:

Recent data shows that around 16.5% of engineers are women, a 2% growth since the INWED Impact Report 2021 was published.

Whether it is an administrative, managerial or technical focus, statistics show that jobs in the engineering sector can often be overlooked by school leavers and women looking for a career change.

My name is Claire Watson and I’m the Director of Bury-based ductwork and fabrications company, Airmatic. This International Women In Engineering Day, I want to reflect on my own experiences, give food for thought and raise awareness in whatever way I can.

As women, there are still some obstacles in our way:

I have worked for Airmatic for over ten years, where we offer premium and bespoke environmental solutions for challenging workspaces through our ductwork and fabrications expertise. I became a Managing Director two years ago and now oversee the site’s day-to-day activities, focusing on levelling up our digital marketing strategy.

In the not-so-distant past during my career in engineering, there were several occasions when I would pick up the phone to help with an enquiry, and the person would ask to speak with a man instead.

I would be lying if I didn’t admit to feeling conflicted and confused when looking back on these exchanges, which have lessened over time, as I have stellar role models and cheerleaders of different genders that root for my success and have never insinuated that my gender is a weakness.

With the above in mind, it recently occurred to me that I have never received a CV from a female engineer for any openings at Airmatic. As the only woman that sits as an Executive Member in the Association Of Ductwork Contractors & Allied Services (ADCAS), this motivated me to think of ways to try and make a difference in our internal statistics and the boards and partnerships that Airmatic is involved with.

We are successful in engineering roles:

In the 1970s, my auntie was the first draftswomen in her place of work. She became my inspiration to thrive in this industry from a young age. Her success was a constant reminder that challenging stereotypes in engineering were possible and that I could build a successful career as a woman in engineering.

Fast forward to 2022, and I’m the first woman to become a Managing Director at Airmatic. The role is rewarding, challenging and full of potential. After recently completing an Oxford University course in Leadership, my eyes are open to the many existing and future opportunities available to Airmatic.

With the help of our team, I steered the Airmatic brand’s relaunch, built upon yesterday’s expert knowledge to recruit tomorrow’s forward-thinking talent, which was a massive milestone in my career.

As women in engineering, our voices should be loud enough for young women and those searching for a rewarding career to hear. Awareness days such as International Women in Engineering Day are a vital part of this, where we can come together to shine a light on our ability and innovation.

I have made an application to become a mentor through The Girls Network, a charity that supports young women through their all-important journey to maximise their ambitions and reach their career potential. By doing this, I hope to share my experiences and encourage those I speak with to consider engineering as a career path.

Alongside this, we will be hosting an Airmatic open day for local secondary schools in the Greater Manchester area on the 7th of July, aligning with UK National Manufacturing Day. The positive action in the local community means a great deal to us, and we hope that young women of school leaving age will take inspiration from our numerous activities and maybe even see their future potential.

We can thrive together:

My preparation for this International Women in Engineering Day has been an enlightening experience that has paved the way for my future efforts to support fellow women in the industry. I aim to introduce more female figures to ADCAS, where like-minded people of all genders can exchange ideas and grow together.

I’ll be starting a recruitment search for the talent of tomorrow, liaising with Apprenticeship UK and other government schemes to raise awareness of career and growth opportunities within the industry.

I would love to expand my network and welcome any fellow women in engineering to get in touch so we can learn from each other and make a difference. Our voices are louder together, so let’s do our part to increase the 16.5% statistic in time for International Woman In Engineering Day 2023.

Established in 1998 by Paul Haywood, Airmatic holds a key position in the industrial ventilation market sector.

In 2002, our founder saw an opportunity in a unique service offering; designing extraction systems for customers who work in challenging, industrial environments. Chris Taylor joined the founding team and established a robust manufacturing workshop to support this concept. His experience of fabrications for paper and wastewater industries contributed to the development of the Airmatic brand that exists today.

Airmatic has secured a trusted, prominent position in the wider ductwork and fabrications market, collaborating with leading names in waste, chemicals, engineering, food, paper and manufacturing.