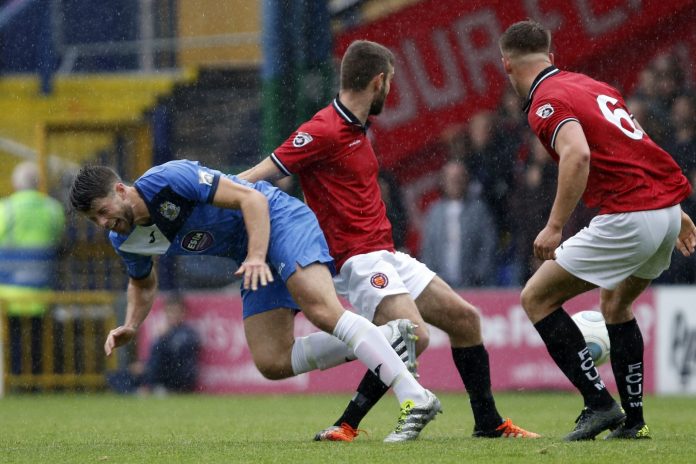 Evo Stik Divison One North Hyde will be in this lunchtime’s draw for the fourth qualifying round of the FA Cup.

Two yellow cards for  Kyle Harrison before half time saw the Tigers reduced to ten men when they were all ready trailing at Boston but Matt Beadle pulled them level just before the interval.

Beadle would level again from the penalty spot in the second half after Hyde had once again fallen behind and would also get the winning goal from the spot after Boston’s captain handled the ball on the line.

FC United and Stockport will join them in the draw after the teams finished level at three all on Saturday at Edgerley Park. The home side surrendered a three goal lead in the second half.Two gaols from Warburton and a third from Duxbury had appeared to put the Hatters into the next round before goals from Gilchrist and Reaves put the reds back in contention.With six minutes left on the clock,Steve Irwin converted the penalty to set up Tuesday night’s replay.

To league action and Stalybridge hung on to claim a point at Bower Fold against high flying Altrincham after seeingJulien sent off in the 76th minute for a second yellow-card offence.It was Alty’s fourth successive league clean-sheet.

Visitors Hednesford inflicted a second home defeat of the week on Ashton with a deserved win at Hurst Cross.Oji and Lawrie giving the Pit men a two goal lead before Liam Tomsett gave Ashton a ninety minute consolation.

In Division One North, a ninety second minute equaliser from Steve Hall saw Droylsden share the points at the Butcher’s Arms against Tadcaster.Tom Corner twice putting the visitors in front.

A last minute goal frfon Kurt Willoughby denied Mossley all three points at Clitheroe after Mason Duffy had put the Lillywhites in front with a quarter of an hour left.

Trafford shared the points at Colne as well, athunderous 20 yard drive by left back Louis Corrigan in the 74th minute equalising Shiraz Khan goal on the hour mark.

Radcliffe Borough’s season continues to turn in the right direction, they found themselves three goals to the good at the interval at Kendal Town, thanks to two goals from Orlando Young and an opener from Carl Peers. The home side pulled one back through Seear just after the interval and a second from Thomas with just two minutes left came too late for the Mintcakes