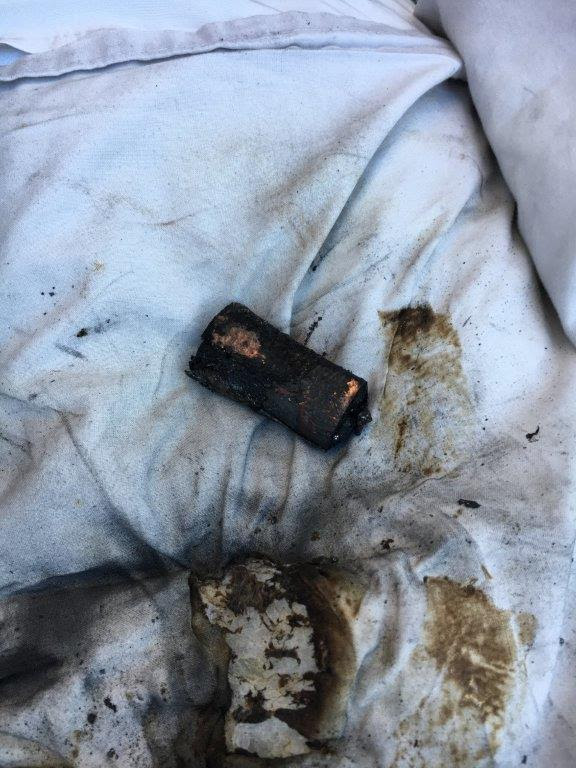 Fire officers have issued a warning always to buy electrical products from reputable outlets and never to smoke in bed.

It comes after a 21-year-old man suffered serious burns when the vape he was holding as he slept overheated, melted onto his skin and caught light to his duvet.

The man woke up because of the heat and his parents raised the alarm before paramedics took him to Wythenshawe Hospital, which has a specialist burns unit. His injuries are not thought to be life threatening.

The incident happened at an address in the Ramsbottom area, Bury, on Tuesday,

The vape was being charged when it overheated. The photograph shows the vape’s battery pack, which is all that remained because the remainder of the unit melted and burned.

It comes as Greater Manchester Fire and Rescue Service has been urging people to take extra care during the national lockdown. Because more people are at home there is a greater risk of accidental fires starting in the home.

Paul Duggan, GMFRS head of prevention, said: “Faulty or substandard electrical equipment can lead to a significant risk of fire.

“We would urge people always to buy electrical products from a reputable and trusted dealer.

“The products they sell will meet the correct safety standards, whereas products bought cheaply online could pose a serious risk of fire or shock.

“We would also strongly urge people never to smoke in bed or when tired because of the risk of falling asleep and the smoking materials catching light to the bed, clothing or furniture.”