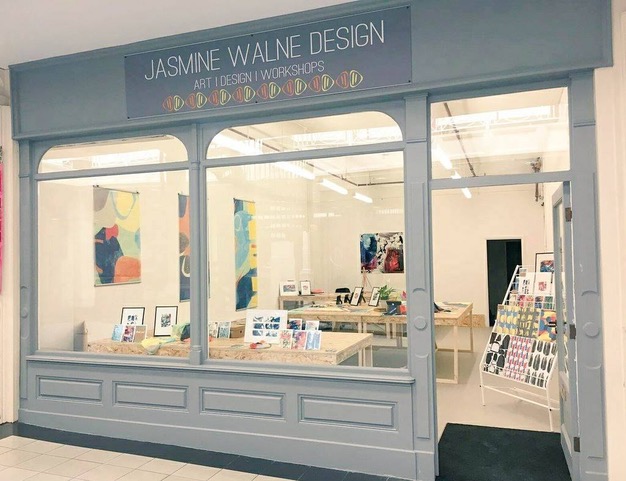 A new shop that has recently opened in Walkden is bringing a little ray of sunshine to the town.

Jasmine Walne Design, located in the Ellesmere Shopping Centre, is the project of twenty two year old Jasmine Walne, originally from Skipton, North Yorkshire and who moved to Manchester in 2013.

She graduated from Manchester School of Art in June with a First Class Honours degree in Textiles and have now opened a shop in Walkden Town Centre with the help of Derwent Estates and the Albert Gubay Foundation after winning a scholarship through the university.

The shop will be stocking design-led contemporary greetings cards, as well as selling prints and original artwork.Jasmine currently sells her greetings cards to many great stockists around the North West including the Whitworth, Manchester Museum, HOME and Salts Mill.

She has also completed commissions for property developers Bruntwood, producing three pieces of large scale artwork for one of their Central Manchester offices as well as being commissioned by Manchester International Festival to produce two individual pieces of artwork as one of their Creative50.
The new space will also be used as a base to run art classes and workshops for the community of Walkden and surrounding areas.
Jasmine wants to engage with the community and get people involved with trying something new and developing their skills in art and design and has already had a great response from the public regarding the workshops.
This Saturday, the 7th of October, between 11-3pm sees an opening event where the first timetable of art classes and workshops will be realesed, along with a new collection of cards (including Christmas Cards!). Special offers on the day!

Parents urged to check in with their children after string of attacks on public...