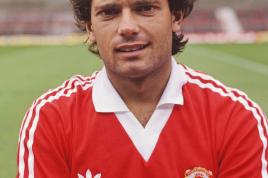 Manchester United have paid tribute to their former stalward Ray Wilkins who it has been announced has died today at the age of sixty one.

Wilkins was being treated at St George’s Hospital in London following a cardiac arrest.

“He will always be remembered with real affection by all those who knew him during his five years at Old Trafford. Ray ‘Butch’ Wilkins was the consummate midfielder who possessed brilliant footballing skills and a brain to match. He will always be held in high esteem at all the clubs for which he played and in particular Manchester United and Chelsea. He will also command a high place in the all-time list of those who pulled on England’s white shirt adorned with Three Lions.” said the club.

Wilkins made  194 (three as substitute) appearances in a United shirt, scoring 10 goals, before being transferred to Italian giants AC Milan in 1986.

He made 84 appearances for England and captained his country 10 times.

His crowning glory in a United shirt was during the 1983 FA Cup final against Brighton & Hove Albion at Wembley. The game was level at 1-1 when, in the 74th minute, he took a pass from Dutch Master Arnold Muhren. Wilkins steadied himself before unleashing an incredible 30-yard shot that curled majestically into the top corner of Graham Moseley’s net.

It was a goal that looked to have won the FA Cup for the Reds, but a late equaliser from Gary Stevens saved the day for Albion. However, Wilkins and his team-mates were not to be denied their winners’ medal after United won the midweek replay with a great performance and a resounding 4-0 win.