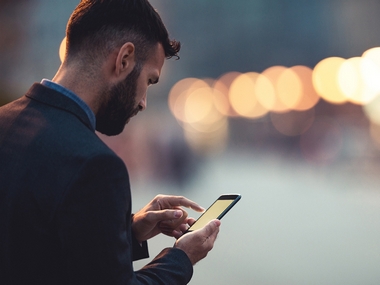 The UK will get it’s first ‘slow lane’ for mobile users at a trial in Manchester City Centre today.

Thought to be the first of its kind in Europe, the trial, which is located Hardman Square, features a designated pathway for pedestrians to help stop people who walk with their eyes glued to their mobile phones from bumping into each other.

The pavements will have arrows and signs that mark out separate walking lanes on the pavement exclusively for slow-walking smartphone users.

It is a marketing stunt by online retailer AO.com who say that a whopping 75% of Brits say they are guilty of walking and using their phone at the same time, according to the new research.

The rise in so-called “DALAPs” (Distracted As Looking At Phone) and “distracted walking” (a behaviour recognised by The World Health Organisation) is when people walk whilst looking down at their phone in their hand rather than looking where they are going or concentrating on their surroundings – typically because they are instead texting, on social media, reading emails or video calling.

Mancunians appear to be the worst offenders when it comes to ‘distracted walking’ with 91% – say they regularly walk and look at their phone, completely oblivious to what is going on around them – with 32% saying they’ve bumped into a lamppost and a further 59% saying they’ve tripped up because they were not concentrating.

Richard Baxendale, MD of AO-Mobile, said: “We have to be realistic and responsible when it comes to the way society is changing. Our research found Brits being distracted by technology when walking is becoming an issue people want tackled. Our trial slow lane is an important first step that may well be adopted by other cities in the future.”

“AO-Mobile is all about making mobile phones simpler and we wanted to highlight that people should pay attention to our new deals and customer service, rather than keeping their head down and missing out.”

Hero Joe comes to the rescue of young women being attacked