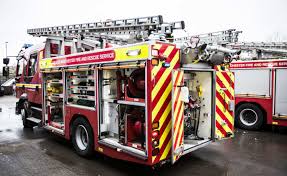 Two elderly people have died in a house fire in Walkden in the early hours of this morning.

The fire broke out at an address in Edge Fold Crescent around 3.30.

Two people in their 80’s were pronounced dead at the scene.

The fire is not currently being treated as suspicious.

A joint investigation between police and Greater Manchester Fire and Rescue Service is underway.

Edge Fold Crescent is currently closed to traffic as a scene remains in place outside the property.