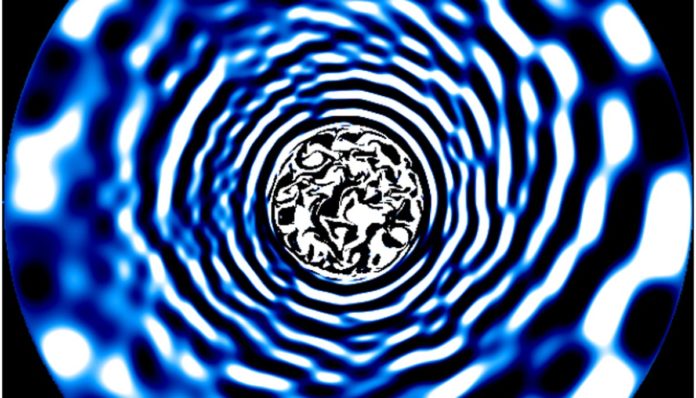 Before space telescopes, few blue supergiants had been observed, so our knowledge of these stars was limited.

Leading astrophysicist Dr Tamara Rogers, from Newcastle University, UK, and her team have been working for the past five years to create simulations of stars like these to try to predict what it is that makes the surface appear the way it does.

Modelling the interior of stars, the team predicted that gravity waves, like those we see in the ocean, could break at the surface of stars.

A second type of wave had also been predicted. These coherent waves are similar to the seismic waves on earth, which are generated from deep within the star.

Now, using data collected by the NASA space telescopes, an international team of experts led by KU Leuven in Belgium, have observed the star for the first time and discovered that almost all of these elusive blue giants do in fact shimmer and ripple in brightness due to the presence of waves on their surface.

As predicted, the waves originate in their deep interior and provide exciting new prospects for studying these stars using asteroseismology, a similar technique to how seismologists use earthquakes to study the Earth’s interior.

Publishing their findings today in Nature Astronomy, the authors say that from observations of these waves, properties of the stars that are unobtainable from other astronomical techniques can now be studied.

Co-author Dr Rogers, based in the School of Mathematics, Statistics and Physics at Newcastle University, said:

“When we first started our simulations and predicted these waves could break at the surface we didn’t think it would ever be possible to observe them.

“Throughout the universe, stars come in different shapes, sizes and colours. Some stars are like our Sun and live calmly for billions of years.

“But massive stars live significantly shorter and more active lives before they explode in what is called a supernova and expel their material into space.

“In line with our predictions, these latest observations have confirmed two types of wave which give us different information about the star.

“Those which break at the surface, similar to the waves breaking on the beach, and the standing wave that just keeps on going and is similar to the seismic waves on earth. From these we can start to understand how the star is moving and rotating and the physics and chemistry of what is going on inside the deep interior, including the stellar core.

“Although we predicted these wave patterns, until now it was just that – a simulation of what might be going on. To actually see it and prove it is really quite an incredible moment for us.”

Since the dawn of humanity, the stars in the night sky have captured our imaginations. We even sing nursery rhymes to children pondering the nature of stars: “Twinkle, twinkle little star, how I wonder what you are”.

Telescopes are able to probe far into the universe, but astronomers have struggled to ‘see’ inside the stars. It is only recently with modern space telescopes that astronomers have begun to unlock the interiors of stars by listening to the symphony of sounds that they generate.

The blue supergiants, are the metal factories of the universe before they explode as supernovae. These stars produce all chemical elements beyond helium in the Periodic Table of Mendeljev, whose 150-year anniversary will be celebrated this year.

“Before the NASA Kepler/K2 and TESS space telescopes, few blue supergiants that vary in brightness because of waves were known. But if you look at the brightness of an individual star for long enough with a very sensitive detector, you can map out how it changes over time. In asteroseismology – the study of waves inside stars – we use these variations to probe the physical and chemical processes inside the stars.”

The discovery of waves in so many blue supergiant stars was a Eureka moment, says Dr Bowman.

“The variability in these stars had been there all along, we only had to be patient and wait for modern space telescopes to observe them.

“It is as if the rock-and-roll stars had been performing the whole time, but only now opened the doors of their concert hall because of NASA space missions.

Therefore, it appears that the nursery rhyme sung to children, “Twinkle, twinkle little star, how I wonder what you are” is not so far removed from the reality of modern-day space telescope observations.

“We are now entering a golden age of asteroseismology of hot massive stars thanks to modern space telescopes. The discovery of these waves in blue supergiants allows us to study the progenitors of supernovae from a novel perspective,” says Dr Bowman.

The team from Newcastle University were able to carry out the research thanks to funding from the UK’s Science and Technology Facilities Council.

The fate of the earth?