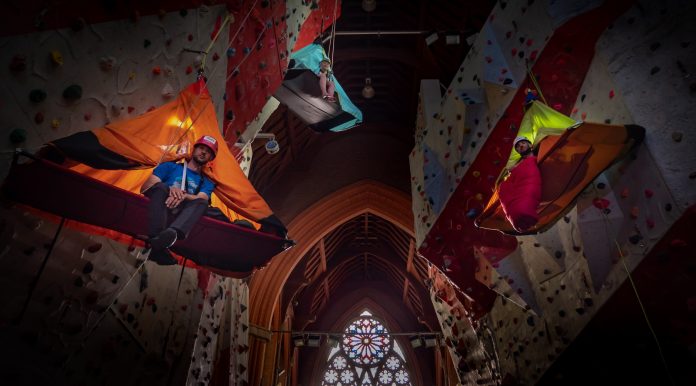 Travel writer and author Phoebe Smith, rigging specialist Ollie Laker and rope specialist and A&E doctor John Pike have joined forces to take on the challenge. The adventurers are sleeping high in the sky on small platforms called portaledges, rigged and suspended from the different sites over ten consecutive nights.

The challenge will take them to a mixture of man-made and natural structures, from the northernmost reaches of Scotland to the southern shores of England.

The trio have set themselves the ambitious goal of raising £20,000 from their Extreme Sleep Out challenge, every penny of which will go to Centrepoint. Centrepoint supports over 10,000 homeless 16-25 year olds across the UK every year, directly and through its partner organisations. Centrepoint’s work is about more than just a bed; the charity provides specialist health support and help to access education and training, so that young people can go on to live independently and leave homelessness behind. 86% of the young people Centrepoint supports move on positively.

Phoebe said: “We’ve deliberately chosen to take on this challenge and sleep in some very strange places but the reason doing this is to help those who don’t have a choice about where they spend the night. I’ve had periods of my life where things have been unstable and I’ve had to rely on the kindness of friends putting me up because I didn’t have anywhere to stay. Sometimes that little bit of help can make all the difference, which is why we’ve chosen to support Centrepoint. Their work is proof that if a young person gets support at the right time, homelessness doesn’t have to define his or her life.

“All the venues are supremely iconic in one way or another. It will be a real physical challenge getting to some of the places we need to get to. But even if doing this stops one more person having to sleep somewhere cold, wet and miserable, then it will be completely worth it as far as the three of us are concerned.”

Centrepoint works directly in Manchester supporting young homeless people to turn their lives around and get into education or training and their own home so the team were especially glad to bring their challenge to the city.

Earlier in the day they visited Centrepoint’s Manchester service to hear more about our work.