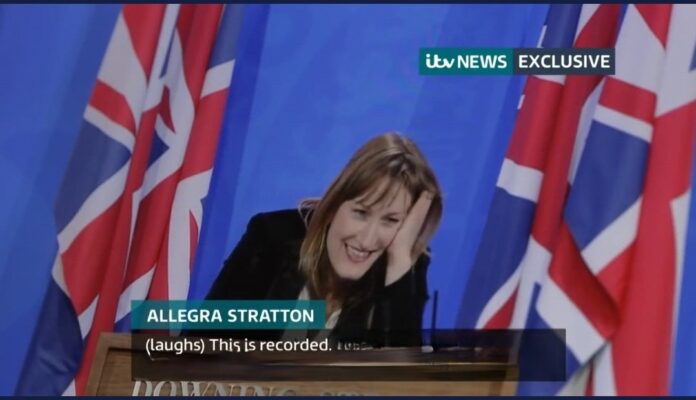 “To think of all the sacrifices they asked people in Greater Manchester to make.” tweeted Greater Manchester Mayor Andy Burnham as footage appeared last night that seemed to confirm that a party was held in Downing Street in contradiction to COVID regulations at the time

A video obtained by ITV shows senior No 10 staff joking about holding a Christmas party – days after one was held there during lockdown.

The exchanges were filmed during a rehearsal for the later shelved Downing Street daily press conference held by his then press Secretary Allegra Stratton.

Stratton, prime ministerial adviser Ed Oldfield and other staff making a series of jokes about a party, including references to “cheese and wine”, the lack of social distancing and making the excuse it was a business meeting.

Stratton then laughingly says: “This is recorded … This fictional party was a business meeting and it was not socially distanced.”

This morning Government ministers have pulled out of planned media appearances

“I stuck to the rules. I didn’t see my Dad. He was in a care home with dementia. On that day we had a ‘window visit’ and he was worried that I was cold and why couldn’t I come in for a cuppa. He died in April. I cannot forgive this”

Downing Street still haven’t put up a minister to do the usual morning round of interviews today. It may be that they are struggling to find a willing victim. Several ministers batted for No 10 only to then watch last night’s video.

“If it feels as though powerful people are not playing by the rules, then there is a blow to morale, it does make it harder to get people to follow the advice.”

For the past week the PM, senior ministers and Number 10 have denied that any rules were broken on December 18 2020, when it is alleged that a “boozy” Christmas party took place in Downing Street with initial reports suggesting 40-50 people in attendance. It is not suggested that the prime minister attended the event.

But London was under Tier 3 restrictions at the time, meaning social events including parties were banned.

The law clearly stated that “no person may participate in a gathering in the Tier 3 area which consists of two or more people, and takes place in any indoor space”.

Meanwhile The Mirror reports this morning that the former education secretary Gavin Willamson also broke Covid rules by hosting a separate “reckless” bash during the ban on socialising last December.

BookBenches heading to Manchester to inspire a city of readers