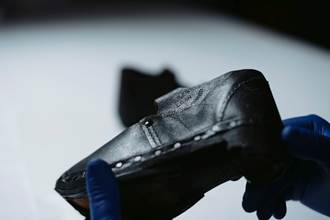 A pair of children’s clogs from the Industrial Revolution stamped with the instruction “not to be pawned”, demonstrate the extreme poverty that was rife among the families whose labour powered the rise of the affluent mill owners.

Over the last two months, the team at the Museum of Science and Industry have been working to add new items in to the Textiles Gallery, design and build new interactive hands-on activities and create a new family-friendly show telling the story of the mills in Manchester.

One of the most poignant objects to be added in to the gallery is a tiny pair of leather children’s clogs dating from around 1870.

Katie Belshaw, Curator of Industrial Heritage, explains: “Practical and hardwearing, clogs were the work-a-day shoe of industrial Manchester’s women, children and men. What is unusual about this pair is that the children who were them never owned them. They were lent by Charter Street Ragged School in Angel Meadow to children whose families could not afford to buy shoes.  They are stamped ‘CSRS loaned, not to be pawned’, to stop poor children or their families pawning them for money.”

The clogs were selected for the gallery to show the precarious lives of industrial Manchester’s workforce.

Katie said: “Workers could earn good wages in Manchester’s textile mills, but work was never guaranteed. Cotton shortages or low demand for cloth could shut the mills.  Workers then had to go without wages. Many struggled to afford food, clothes and a place to live. So called ‘ragged’ schools like Charter Street in Angel Meadow, by the middle of the 19th century one of Manchester’s worst slum districts, provided food, clothing and basic education to Manchester’s poorest people.”

Other new items added in to the gallery include a cotton gin that tells part of the devastating story of slavery and a host of colourful shipper’s tickets featuring exotic and unusual designs.

The gallery will paint a vivid picture of how cotton transformed Manchester into a city like nothing the world had ever seen before, populated by ingenious makers and determined profit seekers, spinning and weaving cloth to sell around the globe. In this sprawling, swarming, rain-soaked city of extreme wealth and poverty, the cotton industry reshaped the lives of Manchester people, creating a new kind of urban community.

As well as the new items, much-loved objects from the gallery’s current form, such as Richard Arkwright’s incredible Water Frame that revolutionised cotton production, will be redisplayed in a way that will increase visitors’ enjoyment, and the ever-popular Explainer shows among the working mill machinery have been updated to give an even deeper and more exciting insight into the birth of the industrial revolution.

Warning issued about smoking in bed after Swinton Fire on Monday

Time capsule sends a message to the future