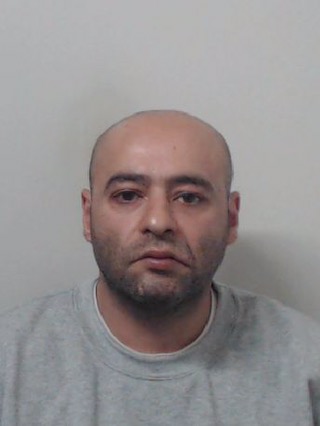 Two men and a 17-year-old boy have been jailed after a man was kidnapped and tortured all because of a damaged Xbox.
Eshan Abtahi,38, of Manor Road,Sale has been sentenced to 11 years and eight months in prison after pleading guilty to GBH with intent, kidnap and making threats to kill.

A 17-year-old boy who cannot be named for legal reasons has also been sentenced to 18 months in prison.

On Thursday 19 May 2016 their victim, a 20-year-old man from Sale, Manchester, was seen by a friend of the four offenders at Stretford Job Centre and was confronted about a debt for a damaged Xbox.

The victim had been given the option to pay for a new Xbox, which he couldn’t afford, or deal drugs on behalf of the owner, which he did not want to do.

He was then kidnapped and taken to a house where his ordeal at the hands of Abtahi, Allen and Riley began.
They first ordered him to do some gardening but then the abuse escalated and he was put in the middle of a living room with his head covered and beaten and tortured for hours.

The three men and 17 year old boy kept the victim overnight where he was subject to further violence and threats. Riley called the victim’s mum and threatened to kill him if she didn’t get a replacement Xbox.

The torture continued into the next day when the victim was moved and taken to Abtahi’s home.

Police managed to rescue the victim after they received information which lead them to Abtahi’s home in Sale.

He was taken to hospitals with a broken jaw, a punctured lung, broken rib, the loss of sight in his right eye and several burns, cuts and extensive bruising. He wasn’t well enough to tell police what had happened to him for several days. The victim told police he believed he was going to die.

Detective Inspector Helen Bell from GMP’s Trafford Borough said: “This was a horrifyingly vicious and sustained attack. The level of terror and the violence that the victim was subjected to was like something out of a horror film. He was lucky to escape with his life and medical professionals stated he would possibly not have survived, if the specialist police teams had not got to him when they did.

“These men will spend the foreseeable future behind bars, and the victim will be recovering from the mental scars for years to come, all over an Xbox. There have been few occasions in my career where I have witnessed such sickening and senseless violence.

“I would like to commend the victim for his bravery. I am glad we have been able to get him the justice he deserves.”