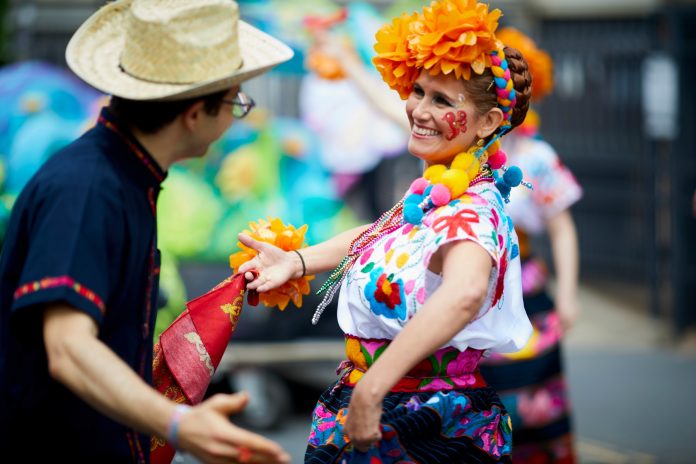 The huge crowds created a wonderful atmosphere as they enjoyed the
fantastic floats, amazing costumes, musicians and more than 80 local
community groups who weaved their way down Deansgate, through Albert Square
and performed across multiple city square locations.

Setting the scene for this year’s WORD ON THE STREET theme, the lead float
represented the need to protect the planet: with rising seas, giant sun and
a polar bear stranded on a melting ice cap. Protecting the environment
featured heavily in Manchester Young Lives’ section which showed a giant
octopus and other sea creatures floating in a sea of plastic waste.

Protest and poetry both featured  in the parade – from Lemn Sissay’s poem
Invisible Kisses which inspired Manchester School of Samba, to the
Suffragette banners of the Pankhurst Centre. Children loved the scary green
Boggart, created with the Harpurhey Neighbourhood Project; and everyone
loved the fantastically rich colours and costumes of the Filipino, Mexican
and South Indian communities.

Now customary for Manchester Day, the event spilled over to the public
squares as the creative canvas was stretched across the city centre for the
afternoon. The crowds were spoilt by a spell-binding array of performance
and entertainment – along with delicious food – in Albert Square, St Ann’s
Square and Cathedral Gardens.

Commissioned by Manchester City Council, and produced by local outdoor arts
experts Walk the Plank, Manchester Day is now in its ninth successful year
and has evolved into so much more than a parade.

The driving principle behind this hugely popular civic celebration is
inclusivity, collaboration and participation, with contributions from
groups representing the city’s diverse spectrum of cultures.

The event has also attracted internationally-renowned artists and guests
from other countries, including Nigeria and Egypt, who have come to see how
Manchester puts on such a huge celebration, and also to be part of the
show!

Tyldesley Primary school deputy head is charged with sex offences with a girl under...