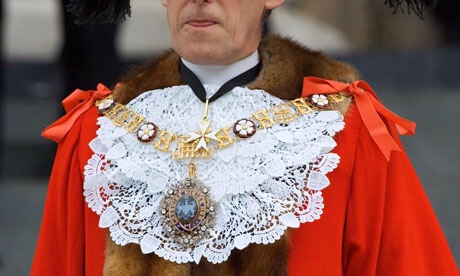 Police are hunting two men who stole the Mayor of Bury’s ceremonial chains during a violent robbery in Radcliffe last night.

The Mayor of Bury’s driver was placing a briefcase containing the Mayor and Mayoress’ ceremonial gold chains into the boot of a car while parked up in the Spring Lane area of Radcliffe.

As he did so, a man in a balaclava approached him from behind and struck him on the shoulder with a hammer, before grabbing the briefcase from the boot.

The victim suffered muscle damage in his shoulder and was treated at the scene.

The offender then jumped into the passenger seat of a green-coloured VW Polo which was waiting nearby and drove off.

Superintendant Karan Lee said: “This is a robbery that hits at the very heart of our town in more ways than one.

“Our Mayoral party had just left a service commemorating the lives lost in World War 2 protecting the lifes and liberties of every one of us, to then be attacked in this way by persons who have no pride or respect.

“Although the gold and diamond chains are of significant historical and monetary value, having been given to the town of Bury by Queen Victoria, the scrap value will be significantly less than the loss to our heritage.

Councillor Mike Connolly, Leader of Bury Council said “Everyone connected to the borough of Bury and Bury Council will be appalled at this dreadful crime committed on our First Citizen and her Deputy as they were carrying out their civic duties.

“The chains are an irreplaceable part of our heritage and so we are offering a substantial reward for their safe return. Our thoughts are also very much with the Mayor’s driver who was hurt during the robbery and we wish him a speedy recovery.”

Councillor Kev to stand down