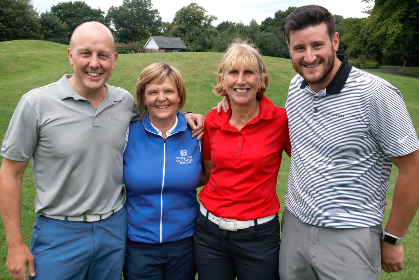 A relay of Raphael Jacquelin, Alex Levy, Gregory Havret and Romain Wattel set the current world record of 34.87 seconds to complete a 500-yard hole on the European Tour in April 2016.

Each team was made up of four of the Worsley Park’s golfers and staff. Each team that took part had to follow these simple rules set during the World Record last year. The hole must be 500 yards or longer with players taking shots as a relay. Player one tees off and player two hitting it next, with players three and four up at the green. If four shots aren’t enough then the order starts again.

The 18th hole at Worsley Park was the perfect place for an attempt at the annual President’s day, it provided a fun and challenging way to round up a great day of golf. It was to be the Ladies Captain and her team who were to set the North Wests fastest time, with Allan Rudman, Jean Kelly, Sue Rudman, Russ Lees making up the team of four to complete the challenge in 1 minute 40 seconds – just one second faster than the staff.

Darren Mercer, Director of Golf, Leisure & Rooms said, “Every team gave it their best shot, with the winning team posting a respectable time. To really challenge the world record our teams needed to birdie the hole, and although they came close, the extra time for the buggy to make its way down the fairway meant that valuable seconds were lost. I think with more practice, we should be able to easily half that time, however we have set the bar now for other teams and clubs to take on the challenge to take the title of fastest four ball in the North West.”

5 reasons to give the Paleo diet a go