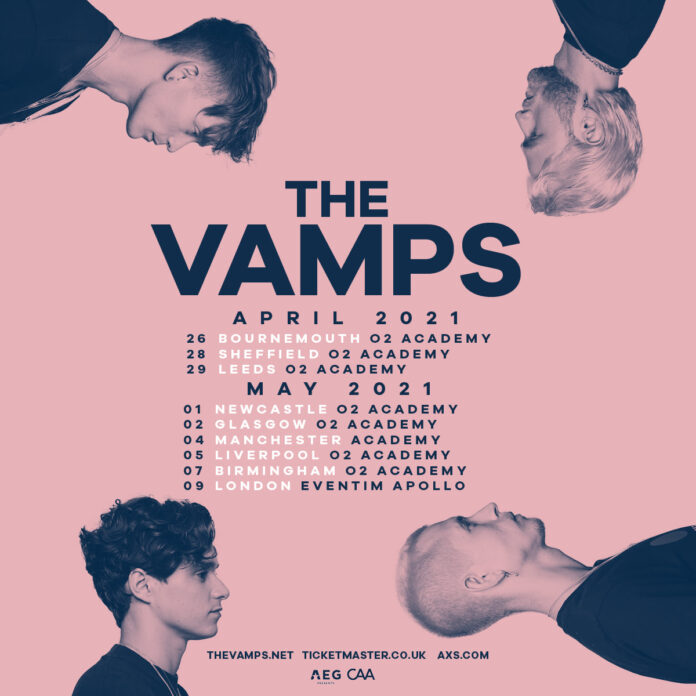 The Vamps today announce The Cherry Blossom Tour for 2021. The shows will see The Vamps perform songs from their brand new upcoming album Cherry Blossom, due for release on 16 October, alongside a selection of their greatest hits.

The band have chosen to partner with Help Refugees/Choose Love. 10% of the profits from VIP tickets sales will go to the organisation (subject to VAT).

Help Refugees started as nothing more than a hashtag. Devastated by images of thousands of families arriving on European shores to be met with barbed wire, borders and batons, a group of friends used #helprefugees to organise a van full of donations in August 2015. Within a week, they had raised £56,000 and were soon receiving 7,000 items every day. Fast forward four years and they have reached over one million displaced people, worked with over 35,000 volunteers and currently support over 120 projects across Europe, the Middle East and the US-Mexico border. Choose Love is a huge, unstoppable movement of people who believe in a better world.

In July of this year The Vamps returned to the music scene with the single ‘Married In Vegas’, A-Listed on BBC Radio 2 and a ‘Record of the Week’ for Matt & Mollie on BBC Radio 1. The track heralds a new era for the band, ‘the rebirth of The Vamps’. Brad, Connor, Tristan and James have written their most personal and fully-formed album to date in Cherry Blossom.

The Vamps had never really had the chance to be bored before 2020 struck. Since their platinum-selling debut album, Meet The Vamps, crashed into the UK charts at number 2 in 2014, the band have been holding onto a dream-like rush of albums [four in total, including 2017’s chart-topping Night & Day (Night Edition), featuring the Matoma-assisted global smash ‘All Night’], singles (eight Top 40 hits including five Top 10s), and world tours (they’re the first band to headline London’s O2 Arena five years in a row).

Having been on the treadmill of album, tour, album-recorded-on-tour, another tour, they fell back into the old routine and wrote half an album quickly 18 months ago. Some proper time off was needed however, so they indulged in that rare thing of space away from the band. Then, last summer, unhappy with the results of those early sessions, they booked some AirBnbs and just hung out and started jamming as the band.

“We ended scrapping all of the first batch of songs and starting again,” James McVey said. This time gave the band the space to meticulously plan exactly what they wanted the album to be and what they wanted to say. Cherry Blossom was born, a title that is a reflection of the theme of rebirth that runs throughout.

In the space of just six years The Vamps have morphed from bright-eyed and bushy-tailed boyband with instruments into a proper fully-fledged pop band crafting arena-sized hits. On Cherry Blossom, that musicality that’s occasionally been lost in frantic release schedules and world tours and award shows has been given the time to properly, well, blossom. This isn’t a vehicle for pop’s current crop of in demand songwriters and producers, this is a Vamps-lead project that’s made all the more impressive by the fact it was honed and finessed during lockdown.

“We’d be lying if we said we didn’t want it to go out into the world and be received positively,” says Brad Simpson of their hopes for the album. “But ultimately we love it so much, and that feeling of self-fulfilment is so exciting. These are songs that really touch on parts of our lives,” he smiles. “The songs mean that little bit more.”

Tickets will be available from aegpresents.co.uk/thevamps, ticketmaster.co.uk, and axs.com.