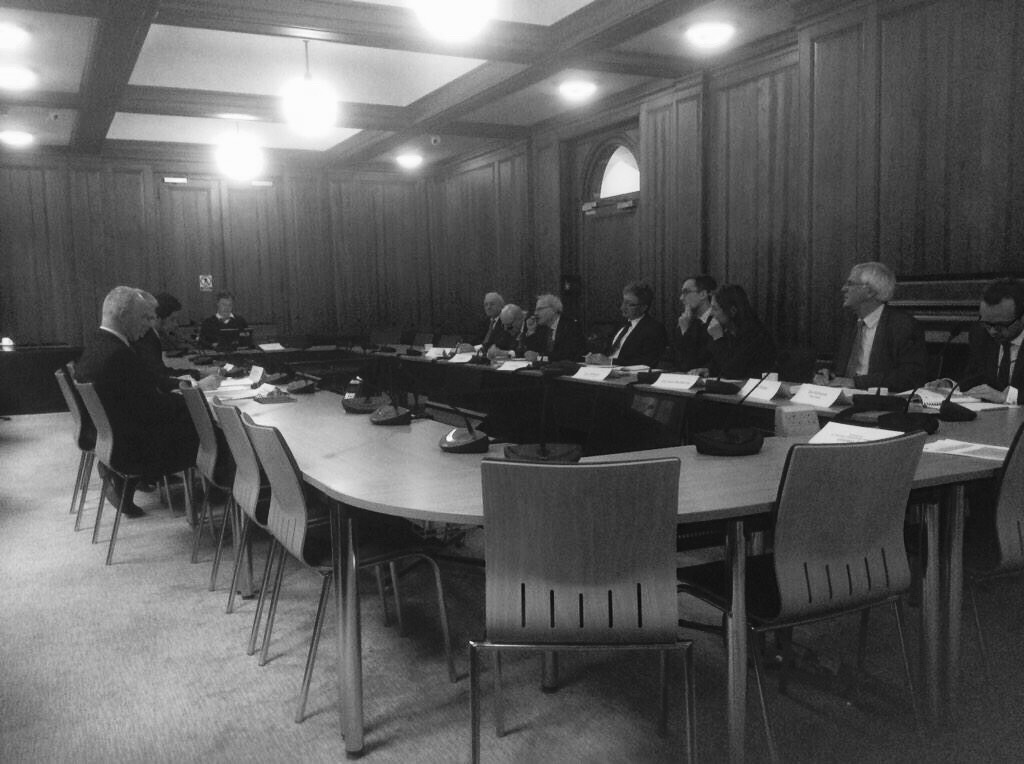 It was to our knowledge the first time that a House of Lords select committee had ventured to Manchester and the subject was the contentious issue of High Speed Two.

About Manchester was there as the Lords Economic Affairs Committee grilled some of our leaders over the North South Link.

Thirty two per cent of people in the North supported it while forty seven per cent are against it according to a recent poll was the Lord’s opening gambit.

It is Sir Richard who is first to the mark. “It is essential to the future economic development of the North, while the public look to the present and not the future.”

“Good transport, ” he added, “was essential especially given the fact that capacity was quickly running out.

Mike Blackburn argued that the poll was based on the issue of speed rather than capacity and once the conversation was centered around capacity, the engagement is very different.

David Thrower argued that it was very difficult for the public to take a long term view. Tinkering with current capacity will buy a short term solution but rail infrastructure takes such a long time to deal with, we need to deal with a solution for 2050.

“The public were skeptical not of the plan but as to whether it will ever happen.”

The next big question. Is there a danger that greater connectivity could increase the North South divide?
The evidence was that it is not true says Richard Leese,

“There is some evidence that London will benefit, but the rest of the country will benefit far more.”

The scheme will also increase capacity in existing links freeing up the time to travel to Leeds and Birmingham said Mike Blackburn.

In France we are told Paris benefited greatly from being at the spine of the France’s TGV but so had cities like Bordeaux. It led to the question as to whether HS2 would simply suck traffic towards London.

AGMA had already told the select committee that the local conditions would have to be right if the region was to benefit. What did they mean asked The Lords?

Manchester is not struggling to attract people said the leader of the council but we need the local structure in place for people to access the network.

Manchester’s economy is complementary rather than competitive to London.the region has a quarter of a million people working in profession services, our research around Graphene and nuclear

The fundamental argument, we were told, is to reject the Treasury measure that if growth happens in one area, it will decline somewhere else.

The committee were worried that Manchester’s growth would adversely effect other Northern towns and cities and they had already been told by an eminent LSE Professor that investment in local infrastructure would create greater growth than HS2 and be realized much quicker.

Not true said Richard Leese, ” both are needed. ”

But what about the Mayor of Liverpool’s comments that HS3 should take priority?

in isolation to other links this was a nonsense said the leader of Manchester Council and anyway it would need to link to the North South Line. Could though the link be begun anyway?

Some of the work is already underway with the Northern Hub and the electrification of parts of the line. It needs to be in place by 2030 but the Leeds Sheffield section of HS2 should also be brought forward.

On one point they were all agreed. There is no doubt that the North of England’s links are lagging behind parts of the country especially on the railways and given the continuing move from our congested motorways to rail.

Two of the most overcrowded trains services currently run from Manchester, community trains operate for 90 per cent over capacity with people having to stand for more than 20 minutes.There are times during the week when the services to London,Birmingham and Bristol are greatly oversubscribed.

Could some of the these issues be alleviated by extra carriages and less First Class seats asked the committee?

Longer trains and longer platforms will cost and will only be a short term solution was the reply and that solution ignores the issue of freight.

After one hour it was over.

We are glued to our phones but does anyone speak anymore?