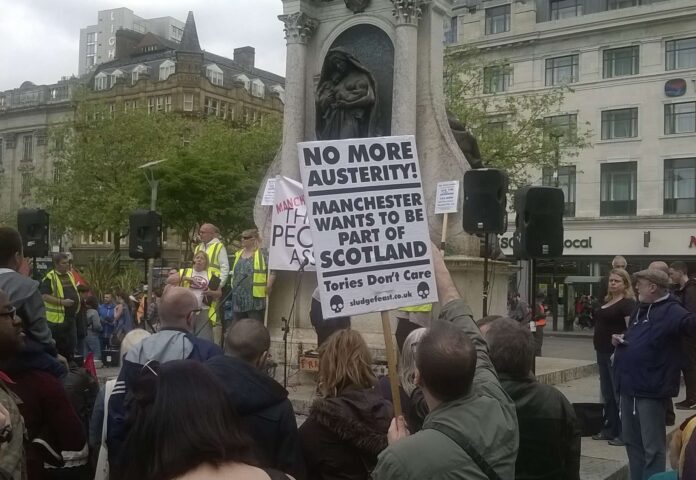 Ten years on from the Austerity Budget, IPPR North has published analysis showing that a decade of austerity has “eroded resilience” in the North of England.

During the Budget Statement on 22nd June 2010, then Chancellor George Osborne, who later coined the phrase ‘The Northern Powerhouse’, stressed that “we are all in this together” and the government would “protect the most vulnerable in our society”. However, ten years on, new analysis by a leading think tank shows that the North has been disproportionately affected by austerity.

Over the last decade, local government and public services in the North have been disproportionately impacted:

The North saw a £347 per person fall in spending on services by councils compared to a £279 fall across England.

Public sector employment fell by 19 per cent in the North—a larger fall than the English average, and austerity came hand in hand with centralisation as the share of public sector jobs rose in central government.

This had serious consequences for people in the North. Over the last decade:

The number of children in temporary accommodation in the North rose from 1,840 to 5,635.

Adding to rising poverty and pressure on public services, poor quality work and low pay have caused further strain. Median weekly pay in the North has grown by less than two per cent since 2009 and is only estimated to have passed its 2009 level in 2019 after a lost decade in pay.

“A decade of austerity has been a hard and persistent blow to the North. It has undermined efforts to improve quality of life and eroded our resilience to events like Covid-19 or the looming climate crisis.

“We must the learn lessons of centrally imposed austerity. It has been a failure. We need real power and resources for the North and England’s regions, so that we can protect our public services and our people from being undermined by Westminster in future.

“More than the rhetoric of levelling up, we need a sustained programme of empowerment and investment in the towns, villages, cities, and people of our region to put right a decade of harm and lost opportunity for northern people, especially our most vulnerable.”

“The Covid-19 crisis has brought into sharp relief just how vulnerable regions like the North have become because of the decade of austerity that local councils have had to endure at the hand of Westminster. Our analysis shows the painful legacy of funding cuts on the most vulnerable people in the North, and especially concerning is the impact on our children, and young people with disabilities. No amount of rhetoric on levelling up can address these challenges.

“What English regions like the North need now is a commitment from Government to reinvest at scale in the local services and jobs that help to improve people’s quality of life right now. Crucially, we need a new decade of devolution which enables places across the North to begin the process of economic and social recovery. This must start with a clear devolution framework and an urgent stabilisation of local council finances.”