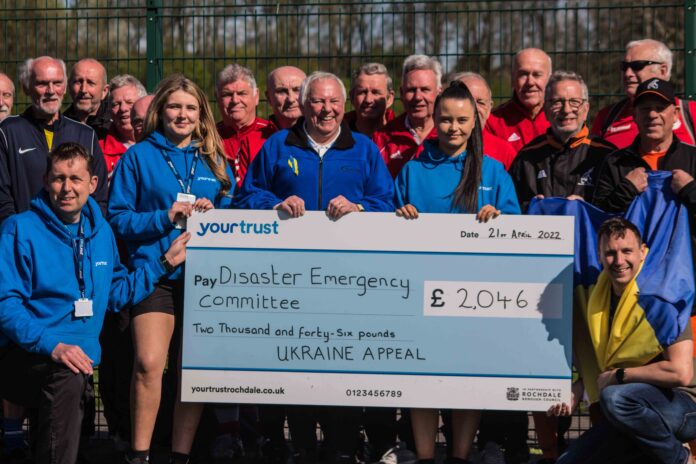 Players from the Greater Manchester Walking Football League have recently completed their fundraising efforts for the Ukrainian Emergency Appeal, raising £2,046 to go towards providing aid to those impacted by the unrest.

The league, which is made up of football players aged 60 and over is operated by charitable trust, Your Trust Rochdale, has been raising money for the appeal since March, with support from friends, family, and Heywood residents.

Fundraising activity has included club events across the eight teams within the league, such as coffee mornings and raffles as well as deductions from match day fees to go into the pot.

Paul Gardner, Health & Wellbeing Manager at Your Trust, who led the fundraising activity, said: “Myself and the team at Your Trust were keen to do something to support the plight of the Ukrainian nation.

“I have been amazed by the support we’ve received. Each week, teams have collected money from match day fees and donated what they have raised at their own club events. The money just keeps coming in as players want to contribute to helping those in Ukraine most in need.”

The cheque was presented by players and members of Your Trust Rochdale to Michael Krylszyn, committee member of the Association of Ukrainians of Great Britain (Rochdale branch).

Speaking of the donation, Michael said he was “overwhelmed by the financial donations he had received overall several weeks from the teams representing the Greater Manchester Walking Football League”.

The funds raised will be used by aid partners in Ukraine in accordance with the Disaster Emergency Fund.

The Walking Football League promotes football at a slower pace and is designed for older people looking to get back into football and stay active.

Sessions are open to both men and women, and all ages and abilities are welcome. The Walking Football League operates at Heywood Sports Village and now has eight teams for the over 60s.