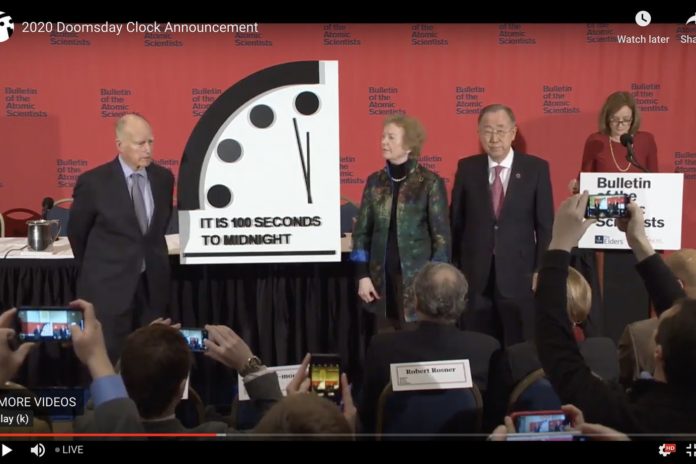 The world is closer to annihilation than it has ever been according to the Doomsday Clock, which was updated today.

That’s 20 metaphorical seconds closer to the moment humans destroy the planet, at least according to a group of scientists who keep track of the many ways humanity might bring about its own end.

As the statement issued today by the Bulletin of the Atomic Scientists explains: “Humanity continues to face two simultaneous existential dangers—nuclear war and climate change—that are compounded by a threat multiplier, cyber-enabled information warfare, that undercuts society’s ability to respond. The international security situation is dire, not just because these threats exist, but because world leaders have allowed the international political infrastructure for managing them to erode.”

Rachel Bronson, president and CEO, Bulletin of the Atomic Scientists, said: “It is 100 seconds to midnight. We are now expressing how close the world is to catastrophe in seconds – not hours, or even minutes. It is the closest to Doomsday we have ever been in the history of the Doomsday Clock. We now face a true emergency – an absolutely unacceptable state of world affairs that has eliminated any margin for error or further delay.”

Former California Governor Jerry Brown, executive chair, Bulletin of the Atomic Scientists, said: “Dangerous rivalry and hostility among the superpowers increases the likelihood of nuclear blunder. Climate change just compounds the crisis. If there’s ever a time to wake up, it’s now.”

For the first time, experts from the Bulletin of the Atomic Scientists were joined in making the Doomsday Clock change by members of The Elders. Founded by Nelson Mandela in 2007, The Elders are independent global leaders working together for peace and human rights.

Former UN Secretary-General Ban Ki-moon, deputy chair, The Elders; and former South Korean Foreign Minister, said: “We share a common concern over the failure of the multilateral system to address the existential threats we face. From the US withdrawal from the Paris Agreement and the Iran Nuclear Deal, to deadlock at nuclear disarmament talks and division at the UN Security Council – our mechanisms for collaboration are being undermined when we need them most.”