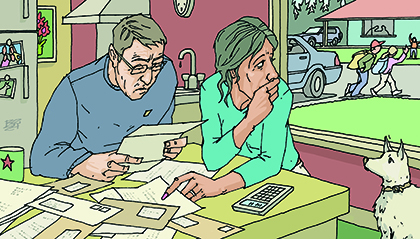 The middle class is shrinking in developed economies as increases in workers’ wages have failed to keep up with the rising cost of housing, education and healthcare.

That’s the verdict of the Organisation for Economic Cooperation and Development the Paris-based policy forum in a report entitled “Under Pressure: The Squeezed Middle Class”

The report put the decline of the middle class down in part to their largely stagnating earnings as median incomes rose a third less than the average income of the richest 10 percent over the last 30 years.

Meanwhile, costs have risen much faster than inflation for some of the key pillars of middle class life like housing, which the report said had risen three times faster than household median income over the last two decades. Middle class households were also forking out more for education and healthcare.

At the same time, workers have faced growing job insecurity, made even worse in recent years by the rise of automation, which the OECD said now threatened one in six middle class jobs.

In addition, labour market prospects have become increasingly uncertain: one in six middle-income workers are in jobs that are at high risk of automation, compared to one in five low-income and one in ten high-income workers.

“Governments must listen to people’s concerns and protect and promote middle class living standards. This will help drive inclusive and sustainable growth and create a more cohesive and stable social fabric.”

To help the middle class, a comprehensive action plan is needed, according to the OECD. Governments should improve access to high-quality public services and ensure better social protection coverage. To tackle cost of living issues, policies should encourage the supply of affordable housing. Targeted grants, financial support for loans and tax relief for home buyers would help lower middle-income households. In countries with acute levels of housing-related debt, mortgage relief would help overburdened households get back on track.

Now Graphene could revolutionise road infrastructure in the UK