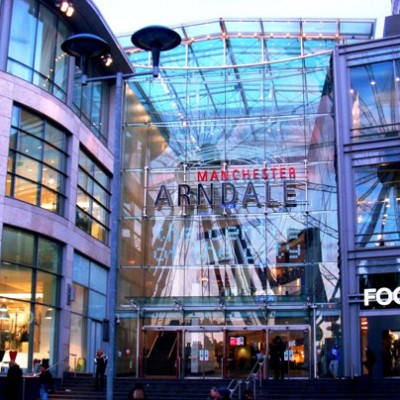 In 1968 Manchester City council was presented with a proposal to transform the centre of the city around Market Street with a blueprint to transform the shopping centre experience of Mancunians for the late twentieth Century.

It included the pedestrianisation of Market Street and would be the first sightings of what would be the Arndale Centre.

Arndale Developments Ltd, a Bradford property company announced in that same year that it had now signed contracts to develop the area bounded by Market, Corporation and High Streets.

It was an historic moment and would point the way to the future, a combination of private and public sector finance almost twenty years ahead of its time after the cost rocketed from eleven and a half million to thirty million pounds in just five years.

A name so synonymous with the centre of British towns and cities in much the same way that you expect to see a cobbled square at the centre of a French town was the brainchild of Arnold Hagenbach, a Wakefield Bakery magnate whose parents came from Switzerland and Yorkshire born Sam Chippingdale who started as a Bradford Estate agent above a barber’s shop.

The ‘Arn’ of Arnold and the ‘Dale’ of Chippendale would form the word that shines red over Manchester and once from numerous other towns.

Chippendale’s biggest assets in the eyes of the Northern councils that signed up for his schemes was that he was not a Londoner.

The first Arndale Centre had opened in Jarrow in 1961 with eighteen in total, including in the south, bringing shoppers something different from rambling through post war High Streets.

They had been to the United States and seen that the future was shopping malls .

The area it replaced in the centre of Manchester was according to a police report a ‘dirty, poorly illuminated area, being patronised by individuals of exaggerated dress and deportment, commonly known as mods, rockers and beatniks’.

For others it was a maze of streets with a vibrant music scene inhabiting its many coffee bars which were “compulsory purchased” by the council.

Construction started in 1972 and the centre opened in stages. The Arndale Tower and 60 shops opened in September 1976, followed by Knightsbridge Mall (the bridge over Market Street) in May 1977 and the northern mall in October 1977.

The market hall, Boots The Chemist and the bridge to the Shambles (over Corporation Street) opened in 1978, as well as the bus station off Cannon Street and anchor stores, followed by Littlewoods and British Home Stores in 1979. On opening, the centre contained 210 shops and over 200 market stalls.

When it was officially opened in 1979, The Guardian described the development as ‘an awful warning against thinking too big in Britain’s cities’ and ‘so castle-like in its outer strength that any passing medieval army would automatically besiege it rather than shop in it…’.

Its critics have been numerous, the Economist would describe it as one of Europe’s ugliest shopping centres, echoed in the Financial Times as one of Britain’s least loved buildings whilst Bill Bryson would taint it as the world’s biggest indoor toilet.

Its external appearance, concrete panels faced with yellow ceramic tiles was hated and combined inside with artificial lighting and indistinguishable malls, with multiple dead ends and no obvious circular route meant that visitors were left bewildered.

Improvements were already taking place before the 1996 IRA bomb, but after 1996 with much of the centre damaged,work began on its rebuilding.

The southern half of the centre was extensively repaired, rebuilt and refurbished. The northern half was temporarily patched up, with buses stopping on Cannon Street itself, before eventually being replaced by Shudehill Interchange in January 2006. Marks & Spencer re- opened, linked to the main mall by a glass bridge link.

As part of the renovation most of the shopping centre’s once-reviled tiles were removed by sandstone and glass cladding. To respond to its new contemporary image the centre was rebranded in 2003 as Manchester Arndale. Ironically it would be reopened by Bill Bryson.

Today it is the largest indoor shopping centre in the UK, over one and a half million square feet of shopping space and forty million footfalls each year. Its strap line simply states “The City’s Centre for Forty years ”

The end of the Pacer