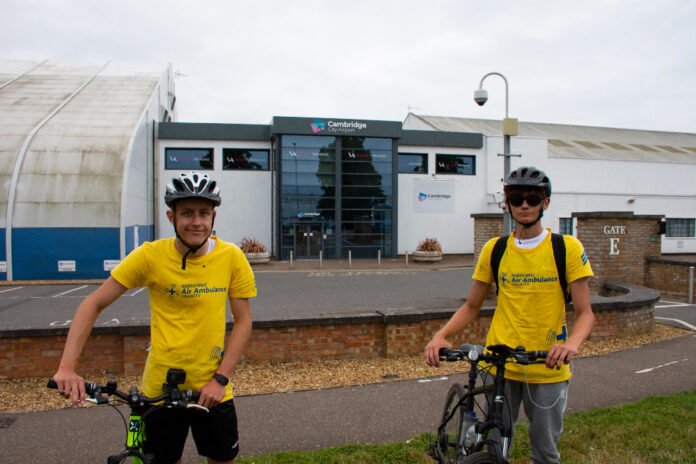 Originally aiming to raise £1,500, the intrepid cyclists smashed their target, raising over £2,000 to date. The pair decided to take on the challenge after seeing the air ambulance crew take off on their missions from City Airport, Barton. Both boys are RAF Air Cadets with the 182 Trafford Air Cadets, and Nathaniel is also training for his private pilot license.

NWAA is funded solely by charitable donations, and does not receive funding from the government or the NHS. After learning this, Nathaniel and Ben began to plan their charity cycle, having developed a love of long-distance cycling during lockdown.

The pair’s vital fundraiser will support the lifesaving missions the NWAA crew carry out every day, 365 days a year. In the last twelve months alone, the charity attended 2,640 missions in total, including 937 in Greater Manchester.

It takes over £9.5 million a year to fund the work of the charity’s skilled Helicopter Emergency Medical Service (HEMS) paramedics, doctors and pilots, raised solely through the generosity of supporters and the dedication of fundraisers such as Nathaniel and Ben.

Nathaniel and Ben commented: “Living local to the charity’s Barton base, we often hear the air ambulance flying overhead during the day. When we found out it relies solely on donations, we knew we had to do something to support the crew and thank them for their work. They provide such an important service to so many people, and you never know when you may need them yourself.

“We knew it would be a challenge, but the charity does such an important job that every mile was worth it. It was a difficult few days with the weather, with a lot of uphill climbs and spending nearly six hours a day in the saddle. It was definitely worthwhile though, especially being able to start at the charity base and stopping by other air ambulances to say thank you along the way.”

Victoria Jones, NWAA’s Greater Manchester regional fundraiser, thanked the boys for taking on the gruelling cycle: “The entire charity was cheering Ben and Nathaniel on, and want to say a big well done to both boys! We are so grateful for their dedication, and it’s incredible fundraisers like them that enable us to continue our service. It’s been a difficult year for the charity, and we continue to feel the financial impact of COVID-19, but working with supporters like Ben and Nathaniel certainly keep our spirits high! The support they have raised will help so many patients across the region, and they should be very proud of themselves.”

Proposals to bring professional football back to Bury’s Gigg Lane