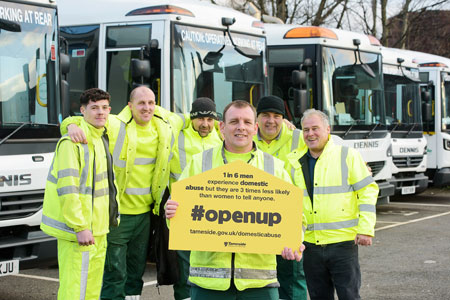 THEY may not look the type to talk about their feelings. But Tameside bin men are supporting the message that it’s okay to ‘open up’ in a new campaign to encourage men to seek help if they are experiencing domestic abuse.

The ‘He’s keeping a Secret’ campaign aims to highlight how one in six men experience domestic abuse but they are three times less likely than women to tell anybody.

It’s hoped it will help reassure male victims that they are not alone and encourage them to tell someone and get support.

Domestic abuse isn’t just violence, it can also involve controlling and coercive behaviour such as controlling someone’s money or preventing them from seeing family and friends.

There is local support and help available for all victims of domestic abuse – both men and women – see www.tameside.gov.uk/domesticabuse or call 0800 328 0967. In an emergency you should always call 999.

The campaign was launched by Tameside male waste and recycling staff at Tame Street Depot in Stalybridge.

It will also be supported by Tameside men from all walks of life – from Hyde United footballers to office workers – who will reinforce the #openup message and that it’s important to talk to someone and seek help.

Posters are going up across the borough, including male toilets in pubs and gyms, to reach men with the message. The campaign will also target men online and on social media.

Tameside Council Deputy Executive Leader Cllr John Taylor, who is responsible for community safety, said: “Men are renowned for bottling up their problems and feelings but we want to urge them not to keep domestic abuse a secret. Male victims may feel very alone but one in six men are victims, that’s at least one person within your sports team, office or group of mates at the pub.

“We want to highlight that getting help is the strong thing to do and hope the campaign will reach out to all men – whatever their jobs, interests or backgrounds – and encourage them to open up and get support and practical help.”

You can follow the conversation by using the hashtag #openup