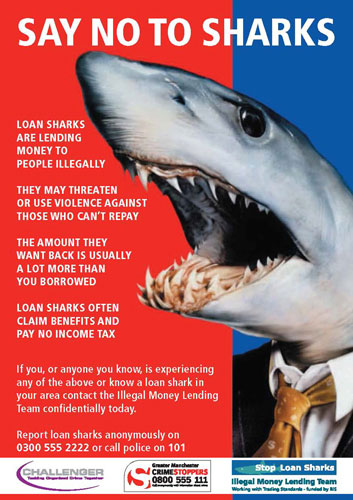 A series of events is taking place across Tameside as part of a week of action to combat loan sharks.

The England Illegal Money Lending Team (IMLT) is working in partnership with Cash Box Credit Union and Tameside Council to deliver community-based events to raise awareness of the dangers of getting involved with a loan shark and to signpost residents to the legal alternatives available to them to borrow money.

These events have been funded by IMLT using proceeds of crime money, confiscated from convicted loan sharks.

On Wednesday, 19 April, partner agencies will gather at the Church of Nazarene on Stamford Street, Ashton, for the grand unveiling of the Stop Loan Sharks community sofa. The artwork has been designed by community groups and residents, with help from freelance artist, Jacqui Symons.

The purpose of the sofa will be to attract the attention of the public and to get across the message – in a fun and collaborative way – that loan sharks must be avoided.

During the event, guests will have the opportunity to speak to staff from Cash Box Credit Union about the benefits of opening a savings account. The first 50 people to join Cash Box and make three consecutive payments into their account over a three-month period; will receive a £25 savings boost.

Cllr Frank Travis, chair of Cash Box Credit Union, commented: “We at Cash Box Credit Union are really pleased to support the IMLT campaign against loan sharks. They are maintaining momentum through the continuation of this popular incentive scheme which we are targeting at communities in Tameside.

“I think the creativity around this, with permanent artwork created by young people and performances, really does draw attention to the campaign as well as giving the participants insight into the problem and how to avoid getting involved with a loan shark.”

Following the grand unveiling, guests will watch an hour-long production by Shontal Theatre Group entitled “It’s Only a Few Quid”. The free perceptive drama will look at the story of Gill, and how her life is turned upside down by the loss of her job. The production will show members of the audience Gill’s experience of being involved with a loan shark and how she gained help and support by calling the IMLT on their 24-hour hotline. As a result of Gill’s courage to contact the team, the loan shark was later prosecuted.

On 12 April, a permanent Stop Loan Sharks mosaic was unveiled by at Hattersley Tesco Extra by the Civic Mayor of Tameside, Cllr Philip Fitzpatrick. It was designed by Hattersley residents and community groups African Women’s Group, Hattersley Community Garden, Mancunian Reunion and Zest.

Sue Moorcroft, Neighbourhood North project officer for Tameside Council added: “We branded our loan sharking awareness in the community as ‘check before you borrow’ which enabled us to talk about how people manage their money incorporating debt, saving alternative lending and the dangers of loan sharking.

“The workshops were well received and the practical art sessions reinforced the message as well as building trust and confidence.

“We are all excited about seeing the artwork on the sofa which will be displayed for the wider community to see and helps facilitate engagement with the public.”

There will also be various information stands set up throughout the week, where people will be able to gain advice and information about illegal money lending. Staff from Tameside Council will be available at:

Tony Quigley, head of service for the National Illegal Money Lending Team said: “These events demonstrate how loan sharks’ cash is being put to excellent use to educate and inform the community of the dangers of getting involved with a loan shark.

“We will continue to work with local authorities and partner agencies to combat loan sharks. They can cause untold misery to the most disadvantaged in our communities. We would urge anyone with information about loan sharking or victims of loan sharks to contact the team on 0300 555 2222.”

Nationally, Illegal Money Lending Teams have secured more than 370 prosecutions for illegal money lending and related activity, leading to nearly 318 years’ worth of custodial sentences. They have written off £71.9 million worth of illegal debt and helped more than 26,500 people.

Lib Dems lay out plans to ban single use plastics