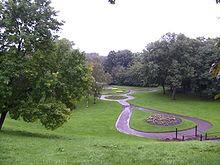 Talking flowers, toy diggers and rope swings will give Britain’s oldest park a 21st century look when it re-opens next summer.Peel Park, Salford, which was one of the first public parks in Britain, has closed for the next stage of its £2.5 million restoration, funded by the Heritage Lottery Fund.

But when it re-opens, there will be over £29,700 worth of new play equipment, thanks to a funding boost from SUEZ Communities Trust. The funding bid by Salford City Council was supported by the Friends of Peel Park.
Councillor David Lancaster, lead member for environment and community safety, said: “We’re very grateful to the SUEZ Communities Trust for the funding which will bring brand new, exciting play equipment into the park. The playground is very important to people who use the park.

“We’ve chosen a mix of equipment for all ages, from the traditional roundabouts, slides, swings and rope swings to more imaginative, interactive pieces such as talking flowers, mini diggers and drums for the younger children.

“It’s another step forward in our regeneration of the park, which is a garden for over 20,000 people who already live close by. Between now and 2025 another 7,000 new homes will be built within a kilometre of the park so it’s a very important green lung for both Salford and Manchester city centres – as well a major part of our country’s heritage.

“Peel Park, which opened in 1846, was the first public park in Britain and the first to welcome everyone where other parks excluded the working class. We’re restoring the 1891 layout of the paths and terraces as well as modernising it for the 21st century so it can continue to serve the people of Greater Manchester for another century or more.”
Marianne Ivin of SUEZ Communities Trust added: “This is very exciting play area project. We are really pleased to be part of the regeneration of this popular park. SUEZ Communities Trust provides grants through the Landfill Communities Fund. This important source of funding has been available since 1997 and has provided such worthy projects with more than £1.4 billion.”

The Parks for People programme jointly funded by the Heritage Lottery Fund and BIG Lottery Fund is supporting the park’s £2.5 million restoration project with two thirds of the funding. Salford City Council makes up a significant proportion of the remaining funding but additional funding opportunities such as the Suez Community Trust, mean even more can be added to the park.

Fly-tipping? Not up our alley!