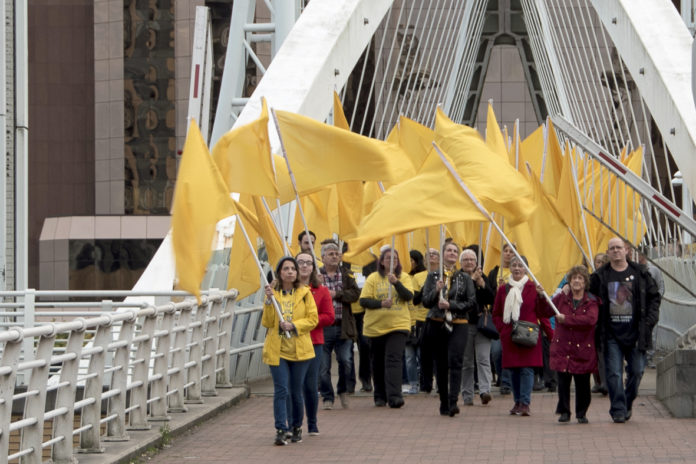 Salford mental health charity Start Inspiring Minds will take to the streets for a Vigil & Procession of Remembrance of all the lives that have been lost to suicide on World Suicide Prevention Day.

Tuesday 10th September will see members of the public uniting at Starts Wellbeing Centre, before the Vigil & Procession of Remembrance commences remembering those we have lost to suicide and in support of those left behind.

126 yellow flags, each representing a life lost to suicide in Salford over the last five years will be unfurled along the procession route to Salford Museum & Art Gallery. Once at the Museum & Art Gallery a vigil of speakers and performances will respectfully honour the lives of those lost to suicide and validate the grief of those that survive within this community display of unity and support.

Maria Roberts of Salford lost her father to suicide in 2012 said “Losing my Dad to suicide has been one of the most traumatic events of my life.  Not knowing where to turn and with little support it has been a very confusing and devastating time for me and my family. Those of us bereaved by suicide often feel an immense sense of misplaced guilt and shame, which is exasperated by the stigma associated with this type of loss. It is encouraging to see Salford holding this vigil to openly remember our loved ones and to work against the stigma and shame of suicide.”

“At last year’s vigil I carried a flag to remember my Dad; it was a touching and moving experience for me as it was the first opportunity I had to publicly remember my Dad and have my loss acknowledged” Maria added.

Dennis Baldwin, from Start Inspiring Minds stated “When a person dies, others offer empathy and compassion, but when its by suicide, there is stigma around that death, the loved ones of those lost to suicide are often treated differently, and become isolated. Sadly, they themselves become at higher risk of suicide. This Vigil & Procession of Remembrance is about breaking though, putting a halt to this cycle of suicide that survivors face”.

“The Vigil of Remembrance will remember those that we have lost and demonstrate to those that have lost loved ones to suicide that the community is here for them with this mass demonstration of support. It contributes towards smashing the stigma that is associated with suicide in all its forms, and contributing to a community that enables people to discuss suicide and enable people to disclose when they are experiencing suicidal thoughts and ideas” Dennis added.

Maria Roberts will be speaking at The Vigil & Procession of Remembrance which will feature performances from Hacienda Classical Principle Vocalist, Yvonne Shelton, and Musician, James Holt. Also taking part are Nav Kapur, Head of Research at the Centre for Suicide Prevention at the University of Manchester, Jon Rouse, Chief Executive of Greater Manchester Health & Social Care along with Paul Dennett, Mayor of Salford.

If you would like to have a loved one’s name added to the roll of remembrance which will be read at the vigil &/or carry a flag in the procession of remembrance please email: dennis.baldwin@startinspiringminds.org.uk